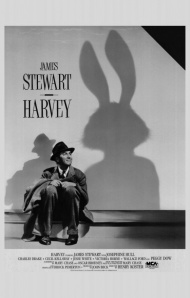 “Years ago, my mother used to say to me, she’d say “In this world, Elwood, you can be oh so so smart, or oh so pleasant.” Well, for years I was smart… I recommend pleasant. You may quote me.” – Elwood P. Dowd

Brief Synopsis – Story of an eccentric man who has an imaginary friend which causes his family members to try and commit him to a sanitarium.

I have wanted to see this movie for years and finally watched it today. It is listed in the IMDB as the #237 top rated movie as I now understand why; I found the movie quite entertaining. It was sassy with its dialogue and like most movies adapted from an award winning play, the action takes place in only a few locations which gives us more time to get to know each character and makes them more 3 dimensional. I wasn’t at all surprised that Jimmy Stewart was once again nominated for an Oscar for his portrayal, his 4th of 5 (He won for The Philadelphia Story (1940)  in 1940. Not included in my tally of 5, he got an honorary Oscar in 1985.)

If this movie was remade now, they would probably use CGI to create the Rabbit, but I think its works much better having it completely invisible throughout the movie adding to the realism that he has an imaginary friend.

At the age of 73, Josephine Hull received a best supporting actress award from the Oscars and Golden Globes playing Stewart’s older sister [he was 42 at the time, so Its interesting how their shared mother managed that 30 year hiatus between children 🙂 ]

Bottom Line– Warm-hearted story of how its possible to live life in a carefree way and how to learn to tolerate people who are different within society.