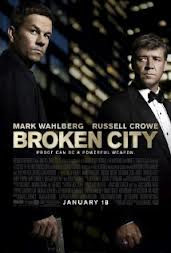 Brief Synopsis – A former NYPD detective is hired by the Mayor to run surveillance on his wife. Nothing will ever be the same for any of them..

My Take on it – Mark Wahlberg is one again great as the rough and tough cop (or ex-cop here) who gets involved in a conspiracy and must find a way to save himself and his city. I know that many people didn’t like this movie too much, but it had some great actors in it (Wahlberg, Crowe, Jeffrey Wright, Kyle Chandler, Barry Pepper and of course Mrs. Michael Douglas; Catherine Zeta-Jones. I had trouble believing Crowe as the Mayor, he was more convincing to me as a cop in LA Confidential (1997), as a whistle blower in The Insider (1999) and of course as Maximum in Gladiator (2000). Here he just seemed over his head in the part. Chandler is great in everything he does and he was very good here too even though it was a relatively small part. I have always loved Barry Pepper since Saving Private Ryan (1998) and 61* (2001) (as Roger Maris), but he too didn’t seem convincing enough as a city councilman running for Mayor.

The story was compelling and it was an intense thriller since you don’t understand the motivation of many of the characters until late in the film so you can constantly question why they do what they do.

Bottom Line – Intense thriller. Wahlberg is great as always, Crowe not so. I still recommend it for those who enjoy political thrillers. Recommended