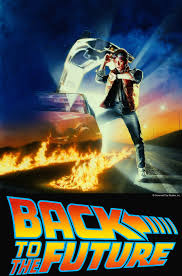 “There’s that word again. “Heavy.” Why are things so heavy in the future? Is there a problem with the Earth’s gravitational pull?” – Dr. Emmett Brown

Brief Synopsis – A teenager is inadvertently sent back in time 30 years and meets his parents as teenagers and must find his way back home.

My Take on it – I recall the hype when this movie came out and remember the thrill when I finally went to the movie theater to see it in the summer of 1985.  As a kid, my friends and I were fascinated by this movie and the concept of a Time-traveling Delorean. We would always discuss this movie and I even had a friend who had seen it so many times, he knew the entire dialogue word for word by heart.

I still enjoy this fantasy flick every time I see it and just LOVE the over-the-top performance by Christopher Lloyd as Doc Brown.  Michael J. Fox was excellently cast (after they filmed 6 weeks with Eric Stoltz where they had to discard all that footage) as Marty McFly and even as a twenty something he expertly gave the impression that he was still 17.

Definitely the most serious of the BTTF trilogy and the best, but it was a pleasure to reacquaint myself with the characters for Parts II and III.

Great cameos by Huey Lewis (who is the singer of  the movie’s main theme – Power of Love) during the first 10 minutes of the movie.