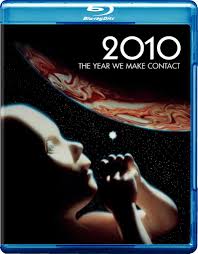 Brief Synopsis – 9 years after the events of 2001: A Space Odyssey (1968) a joint US-Soviet mission is sent back to Jupiter to find out what happened to the crew of the Discovery

My Take on it – I had seen 2010 numerous times on cable as a kid and always enjoyed it.  Having re-watched it after viewing the original, the movie has new meaning for me.  I now know what questions they were trying to get answered and was quite satisfied with the answers given.

This movie was based on the novel by Arthur C. Clarke so there are little to no continuity errors in the story since he wrote the original also.  He wrote the book in the early 80’s where the US-Russian cold war was still at it’s height.  It seems somewhat funny watching a vision of that conflict and it’s escalation after the turn of the century.

Great cast – Roy Scheider, Hellen Mirren, John Lithgow and Bob Balaban.  It was nice that they could get Keir Dullea and Douglas Raine to reprise their roles from the original.

Bottom Line – A fitting sequel to 2001: A Space Odyssey (1968) that answers many of the unanswered questions from the original. Recommended