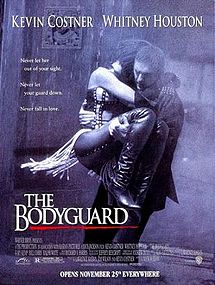 “You’re too old to be this naive” – Frank

The dialogue was a bit cheesy, but the idea for the movie is pretty good and Costner seemed to be believable as an ex-Secret service agent turned bodyguard.

Music was great. Obviously it helps that Whitney Houston is a real singer. The songs were great and are still memorable today 20 years later. Two of the songs were nominated for Best Original songs, but lost out to the main theme of Aladdin (1992); A Whole New World.

If you’re looking for a light-hearted Romance-Thriller, go see this.

Bottom Line – Enjoyed it more when I saw it in the theater, but still an interesting thriller/love story.