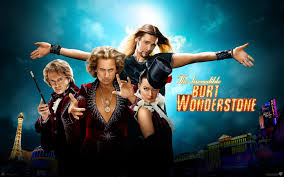 “Are you being serious? What’s a webisode? It’s… it’s a show that you do on the internet, just like being on TV or having a movie except you don’t go… through… you know all the hassle of… people seeing it.” – Rick the Implausible

Brief Synopsis – Two boyhood friends become world renown magicians and must cope with the changes time brings to their duo.

My Take on it – I like magic tricks and was hoping for a better movie centered the magic theme.  Steve Carell has made good movies for the mainstream viewers in the past {Dan in Real Life (2007) and Little Miss Sunshine (2006) are two great examples), but here he once again fell victim to making an over-the-top movie that makes you cringe throughout.

Alan Arkin was great as an aging magician and mentor to the main characters.

Nice cameo by David Copperfield and I liked many of the magic tricks (even though they used special effects for most of them), so it made the movie bearable to watch.

4 thoughts on “The Incredible Burt Wonderstone (2013)”