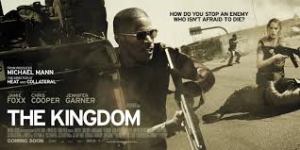 “Does he know where Bin Laden is? That would be a huge promotion for me.” – Ronald Fleury

Brief Synopsis – A team of FBI agents travel to Saudi Arabia to help investigate a terrorist attack on US citizens working there.

My Take on it – This movie combines both action and a real criminal investigation. It can be seen as a story ripped from the headlines since similar attacks have happened over the last decade in the Middle East.

Director Peter Berg put together an all-star cast for this film and that makes it even more enjoyable. Jamie Foxx, Chris Cooper, Jennifer Garner, Kyle Chandler, Jason Bateman, Richard Jenkins, Jeremy Piven and Frances Fisher all did a great job of helping us believe that this really was happening.

My only criticism is that the movie might have been better from an investigative perspective had it been longer. The actual investigation seemed to be cut short in order to try and get more action into this cramped 1:45.  I read that Peter Berg’s original cut was 2.5 hours. I’d be very happy to see that and realize what his true vision was for this film.

It’s a pity that studio’s quite often make decisions to cut length of movies excising the quality of the output.