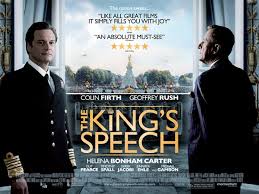 “If I’m King, where’s my power? Can I form a government? Can I levy a tax, declare a war? No! And yet I am the seat of all authority. Why? Because the nation believes that when I speak, I speak for them. But I can’t speak.” – King George VI

Brief Synopsis – The quest of Prince Albert, son of the king of England as he tried to overcome his stuttering in order to be a more eloquent royal public speaker.

My Take on it – I actually enjoyed this movie even more during this re-viewing than I did the first time. Don’t get me wrong, I loved it the first time also, but was able to appreciate it even more so this time.

Supposedly, this movie is very close to being completely historically accurate and my wife and I kept asking each other how is it possible that the royal family would allow this movie to be made since it showed how human the royal’s could actually be. (something that the royal’s always try to avoid). Perhaps they chose to allow this as some sort of penance for past infractions. 🙂

The acting was superb.  Colin Firth, Helena Bodham Carter and Geoffrey Rush were all excellent. I think that Rush was better than Christian Bale was in The Fighter (2010), but I guess the academy wanted to give someone else the Oscar besides Rush even though he was more deserving and should have gotten his second Oscar for this role.

I think the length of this movie was perfect, it didn’t draw out like many biopics do and it also didn’t feel as if it was skipping around too much.