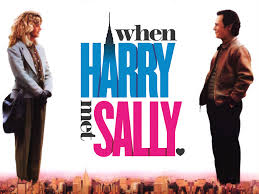 “You know, I have a theory that hieroglyphics are just an ancient comic strip about a character named Sphinxy.” – Harry Burns

Brief Synopsis – Harry Burns and Sally Albright meet on a road trip in 1977 and this movie chronicles their friendship over the next 12 years.

My Take on it – I recall seeing this in the theaters and have enjoyed it every single time that I’ve seen it since then.

This is the quintessential Romantic comedy and I don’t think that there has ever been a better one made (yes, even Annie Hall (1977) was inferior to this gem by Rob Reiner). I actually find it ironic that this movie begins in 1977 🙂

Billy Crystal and Meg Ryan both play the alter-ego’s of Director Rob Reiner and Writer Nora Ephron and the characters they create are very very memorable.

Even watching this for the umpteenth time, I was mesmerized by their performances.

I am always amazed that the stories told by all the elderly couples documentary style through the whole movie are real true life stories, but the couples themselves are played by actors.

Bottom Line – One of the best Romantic comedies ever made, if not THE best. Highly recommended!!