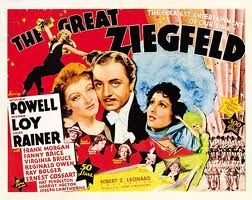 [after he has hired Jack Billings’ valet away from him] “Gentlemen never argue about gentlemen’s gentlemen.” – Florenz Ziegfeld Jr.

I had never seen this movie before and actually have been dreading watching it since I didn’t really expect to like it and feared I would be bored for the long 3+ hour running time.

I was actually surprised that almost the opposite was true.  I mostly enjoyed this movie very much.

This movie has two problems IMHO:

1) In order to give us a better feel of the extravagance and grandeur of Ziegfeld’s theatrical shows, they actually make us endure too much of the re-enactments of the musical numbers. I think it would have been suffice to just show us bits and snippets of the musical parts and let the movie flow without it.

2) The movie focuses too much on Zeigfeld’s professional life that it somewhat ignores letting us get to know him as a personality.

I think if they would have done these two things, this movie would have been much better.

I’m glad that I didn’t need to endure watching this movie in a theater since it wouldn’t have given me a chance to walk around during the long extraneous musical numbers.

Winner of 3 (of 7) Oscars – Picture, Actress for Louis Rainer, and Best Dance Direction.

I recommend this only to the brave viewers who have the patience to sit through 3 somewhat uneven hours.

Bottom Line – Great idea, just not followed through well enough. Too many musical numbers and too little of a real plot. Recommended