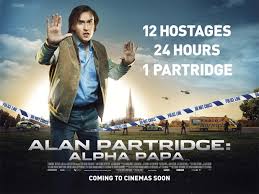 “You can keep Jesus Christ. That was Neil Diamond… truly the ‘King of the Jews’.” – Alan Partridge

Brief Synopsis – A famous Radio DJ must try to find a way to save his co-workers and the radio station when another DJ takes everyone hostage.

My Take on it –  I had never heard about the character of Alan Partridge prior to watching this movie.  Apparently, he is a very popular character on British TV (much like Mr. Bean, I suppose) and not being a fan of British pop culture, I had no clue who he was.

I must say, that he is quite a funny character and although his humor is definitely VERY British, I found myself laughing very often at the dialogue and situations portrayed in the movie.

I think I would have enjoyed it more had I had a greater familiarity with the whole Alan Partridge cannon.  Some of the jokes and situations led me to believe that having a history with the characters would have been more helpful in fully understanding everything that happened in the movie.

Another great thing that is done here is the merging of a superb soundtrack throughout the movie with the situations that the characters are involved in.  It was great hearing songs by Niel Diamond, John Farnham (You’re the voice), Glen Campbell (Wichita Lineman). The Police (Roxanne), The Human League (Dont you want me), Carly Simon (Nobody does it better) and Sparks (Number One Song in Heaven) all in the same movie.

Bottom Line – Enjoyable movie, but a bit too “British” for me. Great soundtrack. Recommended!