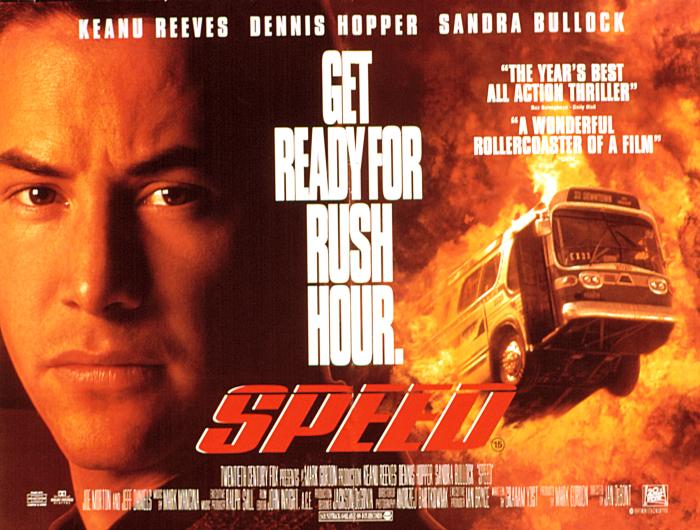 Brief Synopsis – A mad bomber places a bomb on a bus and only an LA cop who the bomber has a grudge against can try to save the day.

My Take on it – In 1994, not too many people would have considered Keanu Reeves an action hero, but he shows here that he has the talent to carry an action movie pretty much by himself.  This obviously was helpful in him getting subsequent roles that eventually led to him being cast as Neo in The Matrix (1999).

Sandra Bullock also got a big boost from this movie.  She wasn’t in too many movies prior to this one and definitely wasn’t leading lady material in anyway before this came out.  Her role here isn’t leading, but her character has a major part here which I’m sure helped get her more opportunities afterwards.

By now, most people are familiar with the premise of this movie and many movies and even TV shows make reference to this movie’s “bomb on a bus” theme.

My favorite has always been the reference in the TV show Mad About You.  Paul (who is a documentary director) is cleaning out his wallet and finds a slip of paper and then reads out loud ‘bomb on bus, explodes if goes over 50 mph’. and then says something like “too bad I didn’t follow up on the idea”.  It’s only a passing reference, but those are the best kind of references in movies and TV shows which really challenge us cinephiles and make sure we always pay attention 🙂

I remember when I saw this in the theater, my friends and I couldn’t believe how much our hearts pounded for close to 2 hours with very few moments to catch our breaths.  It is truly a non-stop action thriller.

Bottom Line – Great thrill ride.  The action keeps coming throughout and it is an amazing example of how to make a winning action-thriller. Highly recommended!