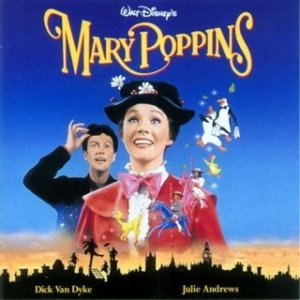 “In every job that must be done, there is an element of fun. You find the fun, and – SNAP – the job’s a game!” – Mary Poppins

Brief Synopsis – A British family in the early 1900 hires a nanny who tried to bring fun and cheer into their cold lifestyle.

My Take on it – I was inspired to re-watch this movie after having seen Saving Mr. Banks (2013) earlier this week.

I was shocked that I hadn’t seen this in over 16 years (I have only been keeping a record of movies I’ve seen since then) and was pleasantly surprised at how much I enjoyed it again and also by how much I remembered the story and songs.

Julie Andrews and Dick van Dyke are both amazing here and she won an Oscar as Best Actress for her portrayal.

The mix of live action and animation is done extremely well for it’s time.

It’s interesting to note that this was the only Disney full length feature to be nominated for Best Picture in Walt Disney’s lifetime.

Having just watched Saving Mr. Banks (2013) gave me new insight into certain aspects of this film that I believe even helped enhance my understanding and appreciating during this viewing.  I guess it’s similar to seeing a behind the scenes documentary that tells you secrets about the production that you didn’t notice beforehand, but after learning those secrets the movie will never be the same for you.

As a father, this movie has also opened my eyes even more  to the fact that no matter your age, you should try and find time to show your kids how much they mean to you.

It’s interesting what kind of an effect a movie can have on you when you see it at different stages in your life.

Bottom Line – Excellent movie that deservingly has been a known children’s (and adult) classic for 50 years. Highly recommended.