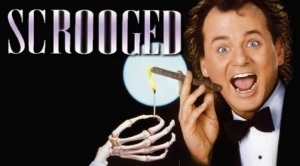 “Hey. Are you glad to see me, or is this a shotgun in your pocket?” – Frank Cross

My Take on it – I love when a modern adaptation of a great fictional work succeeds in re-telling a timeless tale.

This is probably my favorite (eventhough Roxanne (1987) and West Side Story (1961) are also both amazingly adapted) adaptation since it truly captures the essence of the original, but modernizes it in a way that we can appreciate it on its own merits too.

Bill Murray is perfectly cast here as the Ebenezer Scrooge character who we all love to hate.  I think that his greatest role was in Groundhog Day (1993), but this performance is a close second.

Richard Donner made this while taking a break between Lethal Weapon (1987) and Lethal Weapon 2 (1989) and you can clearly see his hand in many of the scenes here.  He even adds an anti-apartheid slogan in a few scenes foreshadowing his next big film.

Besides Murray’s performance, Karen Allen, Bobcat Goldthwait, and tons (literally) of cameos make this movie a joy to watch.

My favorite parts of this movie are the beginning commercials and the group song at the end.  I have always loved Annie Lennox and Al Green’s version of Put a Little Love in your Heart, ever since I saw this movie.  Hear it here.

This movie has some great classic hilarious lines and situations.

I also think that this is perhaps the best adaptation of A Christmas Carol ever made because it is done in such a great way.

Bottom Line – Excellent adaptation of the classic Dicken’s tale. Murray is perfectly cast and besides Groundhog Day (1993), I think this his second best performance.  Lots of great cameos.  Highly Recommended!