First off, I’d like to personally thank Zoe from The Sporadic Chronicles of a Beginning Blogger for inspiring me to watch all 4 “Ocean” movies.  Her concise reviews made me want to revisit this series myself.  If you don’t already follow her blog, I suggest you get over there right now (when u finish here 🙂 obviously) to check it out!  Thanks Zoe! 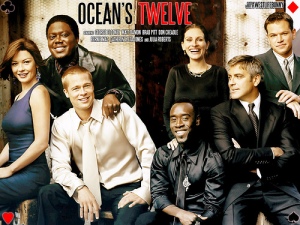 “You’re all aces in my book, but I want the last check I write to bounce.” – Saul Bloom

Brief Synopsis – Ocean and his “crew” get back together to pull another job, this one in Europe.

My Take on it – I hate it when a movie works well and the powers that be decide that “since it worked once, let’s try to get everyone to come back for another one just to make money. who cares about the script or the plot.”

That is exactly how I feel about this movie.  I liked the fact that the characters were able to get back together a second time, but the storyline just wasn’t as good as the original which just disappoints.  I think another drawback on this one was adding Julia Roberts to the team (making it 12 instead of 11 as in the first one.).  Her character is quite annoying and whiny and I just wanted her to get caught to live the rest of her days in an Amsterdam prison.

Credit is due tho to Director Steven Soderbergh and George Clooney for being able to get EVERYONE to return and give Cheadle his name above the credits.

Part of what I think worked extremely well in the first one was the location; Las Vegas; which was an important “character” in the film.  The use here of numerous European cities dampens the fun here a bit.

The only reason to watch this one is for nostalgic purposes that eventually will remind you to go watch the first one again.

Bottom Line – Great cast (all returning from the original), but plot and location is weaker.  Watch the original again instead!!