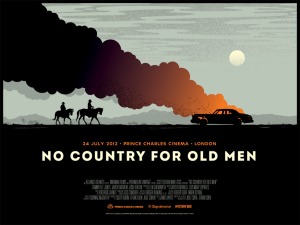 “1958. It’s been traveling twenty-two years to get here. And now it’s here. And it’s either heads or tails. And you have to say. Call it.” – Anton Chigurh

Brief Synopsis – Three sparsely connected stories about some drugs, money, murder and all out mayhem in Texas in 1980.

My Take on it – I enjoy movies that are told in a non-traditional fashion, but at the same time when they do so, I expect them to make everything clear.

That is my big problem with this movie.  I really enjoy the way the Coen brothers know how to tell a story and I really find this movie compelling, but this movies leaves so many scenes very ambiguous and you have to try and guess what maybe happened.

That being said, I believe that this is their best movie aside from Fargo (1996) and they deservingly were each personally nominated for 4 Oscars and ended up winning 3 each.

They know how to tell a story well and in this particular case, they are able to tell 3 converging stories without any of the 3 main characters ever meeting and having a conversation.  There is one character who is the connector between the three and it works amazingly.

The 3 main characters are all played by stellar actors and each of them are great here.  Tommy Lee Jones, Josh Brolin and Javier Bardem each play their characters the way we expect them to, but Bardem is the stand-out here as a cold and ruthless killer who could actual rival Hannibal Lecter as the villain with the least bit of emotion when stalking and killing their prey.  Bardem won an Oscar for this role.  My favorite line from Bardem was from when the actor first saw how his character would look and said “I won’t be getting laid for 2 months with a haircut like this”.

The source book that this movie is based on was considered un-adapatable and the Coen brother have proven that fact to be false.

It lost Cinematography, Film Editing (which was the 4th nom for the brothers), Sound Mixing and Sound Editing.