Thanks again to Table9Mutant at Cinema Parrot Disco for letting me be a part of the amazing John Hughes blog a thon. If you haven’t already done so, I highly recommend you check it out! 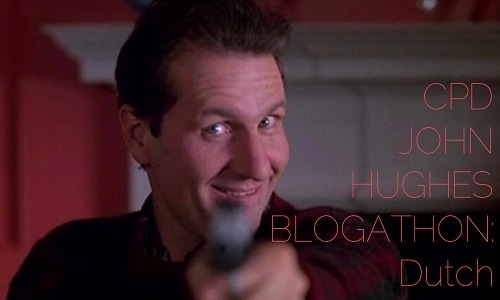 This review for the John Hughes Blogathon comes, again, from Rob of Movie Rob. Thanks so much, Rob – you’re a Hughes-reviewing MACHINE! Lol! Let’s see if he liked Dutch. 🙂

“I feel the pain in my crotch in my teeth!” – Dutch

Brief Synopsis – A man agrees to accompany his girlfriend’s son on a trip from Georgia to Chicago in order for them all to be together for Thanksgiving.

My Take on it – This movie is a bit of a disappointment for me because John Hughes tries to take a formula that worked so well for him in Planes, Trains and Automobiles (1987) and reinvent it for a child and an adult road trip.
The characters in this movie (Dutch and Doyle) just aren’t as interesting as those of Del and Neal. Hughes also “dumbs”-down the…