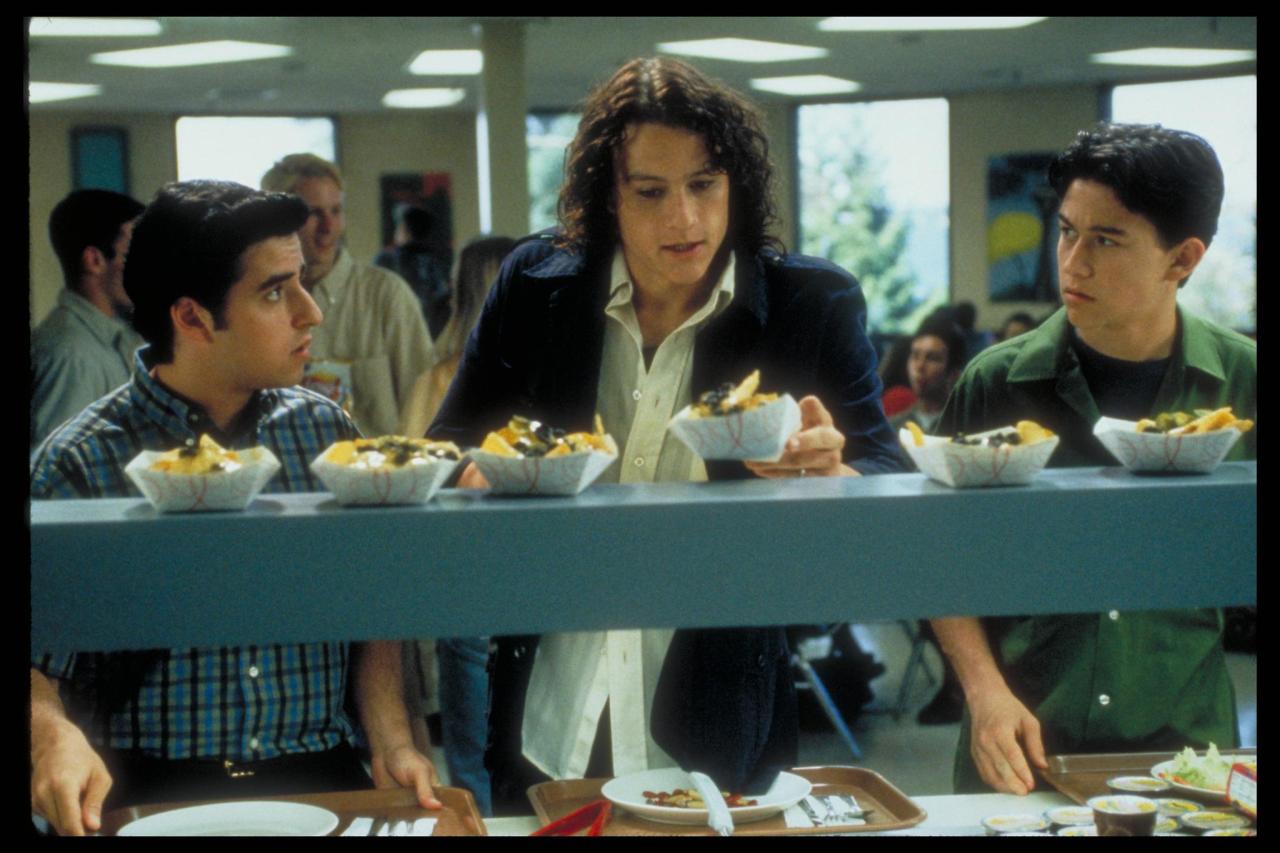 For my first guest post for my April Genre Genre, I present you with a review of Zoe’s favorite rom-com.  If you don’t already follow Zoe’s blog, The Sporadic Chronicles of a Beginner Blogger, I strongly recommend that you head on over there and check her stuff out.  Her site is filled with movie reviews, book reviews, an occasional TV show review, guest top 10 lists and a very cool series called Sporadic Scenes which highlight some of film (or TV’s) most memorable scenes.

I will now pass things over to the great Zoe….

“I don’t like to do what people expect. Why should I live up to other people’s expectations instead of my own?”
– Kat Stratford

Alright, so Rob put it out there that this Genre Grandeur would have to be in the line of romantic comedies. Now, anyone that knows anything about me knows that this is one of the most reviled genres for me, something I really battle with and something that I am not a big fan of. However, every now and again you will get a flick in there that is just plain and simple awesome, something that is different and not so damn soppy (that absolutely grates on me). I thought about this for a while, and of all of the movies that I have seen in this genre (which is, admittedly, a pretty skinny list); this is one that I have gone back to over and over again over the years. I absolutely love it. For various reasons, of course, and I am going to try and talk about a few of them here. My movie of choice, obviously, is 10 Things I Hate About You.

10 Things I Hate About You is just a ridiculously fun movie, it is so 90s it should be illegal and has a fantastic cast working for it. Heath Ledger was the perfect bad boy Patrick Verona, smoking, drinking, all dark and broody, lovely long hair and doing what he wants when he wants. He gets roped in by another classmate called Joey Donner (Andrew Keegan) to date Katarina “Kat” Stratford (Julia Stiles), seeing as the only way for him to date Kat’s sister Bianca (Larisa Oleynik) is by ensuring that Kat is seeing someone as well. This is a new rule enforced by Dr Walter Stratford (Larry Miller), the girls’ extremely overprotective father who constantly fears nothing but the worst. However, as much as Joey thinks this is his perfectly conceived plan to get laid, the big strings are, in actual fact, being pulled by the new kid at school, Cameron James (Joseph Gordon-Levitt), who has fallen crazily in love with Bianca and is informed by his friend Michael Eckman (David Krumholtz) that she is way out of his league.

I know, this all sounds ridiculous and mad, but it works so well on so many levels. Heath Ledger is just amazing to watch as always. He was such a commanding figure on screen, someone you could not help but pay attention to. Initially he is dead set against going out with Kat, who does not cut a pretty picture. However, when money gets put on the table, he is suddenly game. Getting a date with Kat soon becomes a full time project for him, which he is duly assisted with by both Cameron and Michael, both running private and independent research. Naturally, eventually, he starts to like things about her, and she starts to thaw toward him. Julia Stiles was so well cast to play Kat it is not even funny. She was unapproachable, prickly and nasty, a strong feminist with her own little insecurities she has hidden away. She was completely different from her whiney little plastic sister it was just mad. Bianca irritated me on some levels because she really was so self-absorbed and bratty. I loved the chemistry that this movie managed between both couples. Stiles and Ledger played off each other exceptionally well, and Gordon-Levitt and Oleynik also worked nicely. 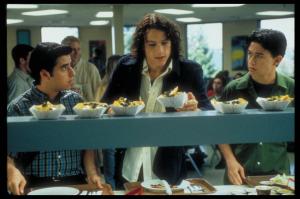 “You embarrassed the girl. Sacrifice yourself on the altar of dignity and even the score.” – Cameron James

The events that transpire really have me laughing at the best of times. They are funny, they are witty, and it is really cool to see how one’s perception of another person can change when you actually scratch past the facetious surface that they use when meeting with the world. Bianca went from being obsessed with Joey and flattered that he would be interested in someone like her (though for him it is all about a bet) to realising that he is shallow and fickle. Watching Kat finally realise that all men are not total tools to having her fingers burnt again is pretty sad. The conversations between her and Patrick are well worth watching, and seeing how much Patrick transformed as a person just due to a little interest is also splendid. The stories about him, the coupling of the pair and how it comes to be is highly entertaining. Their English teacher, Mr Morgan (Daryl Mitchell), also provided endless laughs.

Caption: “You’re not as vile as I thought you were.” – Kat Stratford

The plot was just entertaining all round for this one, and there are places where it is predictable, but instead of feeling formulaic, being boring and being stupid, this movie presents itself and fresh and funny, and excels at both. The soundtrack was decent; it definitely complemented the type of movie as well as the characters that were presented. This never got mushy, and it was hilarious to watch the type of father the girls had to deal with, he was a little off his rocker. The characters developed well, and didn’t actually feature scenes were there was such a change of personality that left you reeling, wondering how exactly it is that they got to the place they were at.

A big thing that worked for me is that it was a great modernisation of Shakespeare’s Taming of the Shrew, although I have not read it in its entirety, I get the gist and this was a good way to have brought forth something like that. I love the way that this film is not restricted to women, this is something that guys can watch and enjoy too, which is something that is becoming increasingly rare with these types of movies. I have got to say that this movie was just a joy to watch, and it never gets old. Definitely something I would highly recommend and something that I have no difficulty watching again, something that can be enjoyed by a couple, not leaving the woman to moon and the dude to chew off his own wrists.

Thanks again to Zoe for this great review!

Just a reminder, if anyone wants to still send me their posts for this series, email them to me at romcom@movierob.net before 25th April.  Can’t wait to see what your favorite rom-com is.