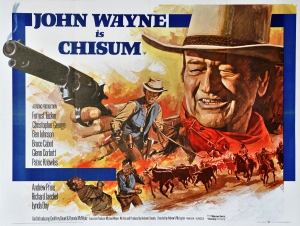 “I made you a promise, Mr. Tunstall. Now I’m making myself a promise. It says in the Bible, “The candle of the wicked shall be put out.”- Billy the Kid

Brief Synopsis – The legend of Billy the Kid told from the standpoint of John Chisum, a cattle baron who helped fight the Lincoln County War.

My Take on it – Being a child of the 80’s, I am quite familiar with the film Young Guns (1988) and its portrayal of the story of Billy the Kid.

Since I loved history, I read whatever I could after seeing the movie (pre-Wikipedia) and got to know the story quite well.

Young Guns (1988) obviously sensationalized the story, but it also got a lot of it right and most importantly it was an enjoyable film.

This version, told from the perspective of a character who only briefly appears in Young Guns II (1990) (played by James Coburn) just isn’t as interesting and in many instances is downright boring.

The only scene worth watching is the cattle stampede, it truly was breath-taking.

Having known the story and also being able to compare it to the brat pack version, I just wanted things to move along but instead they were just dragging along throughout.

This might have been the best film version at the time, but it’s not the most entertaining of them.

Bottom Line – Good spin on the Billy the Kid story, but not one of the best films made about it.