For the first guest post for Genre Grandeur – May 2014 – Crime, I present you with Zoe from Sporadic Chronicles of a Beginner Blogger‘s review of Drive (2011).

If you don’t already follow Zoe’s blog (which you should already be doing), I suggest you do so now.  Her site is full of movie reviews, TV reviews, book reviews (how does she find time to read so much?), guest top 10’s and her great feature Sporadic scenes which spotlight’s amazing scenes from Movies and TV shows.

If you are interested in participating in this months Genre grandeur, it’s not too late.  All you have to do is send me an email to crime@movierob.net with your  review of your favorite Crime movie and I’ll post it.

Looking forward to seeing what you all have in mind…

and now on to Zoe’s review…

So Rob thought it would be terribly amusing to choose crime for this month’s Genre Grandeur, which excited me because there are so many crime movies that I love, but also proved to be exceptionally difficult. For one, I could not write about The Godfather seeing as I am writing that for another fellow blogger, who also happened to have published my second option, which was The Departed. Wow. Still a lot of options, right? I mean I don’t want Rob to sit with some regurgitated piece from me, one that has made the rounds somewhere else and all that. So I thought some more, and got caught up with all the gems Nolan has provided us over the years (Memento, The Prestige, Inception), Tarantino’s pieces (Pulp Fictions, Reservoir Dogs), as well as some other greats of the category, such as L.A. Confidential, The Usual Suspects, The Wolf of Wall Street, and American Gangster to name but a few. Ultimately, though, a movie that I am ridiculously obsessed with at the moment and continually keep coming back to is Drive, so here I am going to talk about that in some more detail.

A mysterious Hollywood stuntman, mechanic and getaway driver lands himself in trouble when he helps out his neighbor. (IMDB)

Drive is just one of those films that came out of nowhere for me. I totally missed it when it came in 2011, and nobody I know had recommended it to me, and I was not blogging in 2011, where I would have theoretically caught it when everyone else was watching it. I had no idea what I was going in for, and again that proved to be a godsend. Ryan Gosling stepped up and delivered a brilliant performance as the Driver, definitely my favourite from him. He is silent, mysterious, smart, ruthless… all these things that come to the surface the longer you watched. Drive features little dialogue, but it works wonders in favour of this movie. The camera work and score and actions carried much of the story, rendering speech something that could be cumbersome. There was enough of it to convey story, but the rest was conveyed differently.

Quote: “You put this kid behind the wheel, there’s nothing he can’t do.” – Shannon

Another thing that I love about Drive is that at its core it is not a romantic movie, though it cannot be overlooked in this story. The romance between the Driver and Irene (Carey Mulligan) is something beautiful to behold, chaste and simple, nothing too extreme. It was downplayed considerably, made something absolutely gorgeous. The Driver’s feelings for Irene, despite the fact that her husband, Standard Gabriel (Oscar Isaac), has returned, are ever present, though the dynamics change a little watching the two after Standard comes home. It is evident that Irene is torn between the father of her son, Benicio (Kaden Leos), and the Driver. Their romance had this innocence about it that just made it so appealing to watch, too. I thought it was awesome that the Driver put everything out there to get to Irene, to help her and Benicio out, even if it meant that she was still with Standard and not him, as long as she was safe and happy that was all that was important. I also thought Standard’s character turned around completely from how he starts up and where he progresses to, he eventually figures out that the Driver is possibly the best thing that ever happened to him, and will do everything he can to help him out, though the Driver’s motives are solely focused on the protection of Irene and her son.

Quote: “I’m not doing anything this weekend, if you want a ride or somethin’.” – Driver

Then we need to talk about the score and the soundtrack. When I watched this the first time and the music started up (the opening credits played with Nightcall by Kavinsky) and I was a bit like erm… I mean not being funny, it is so not my scene in terms of music. But barring that, the more I watched, the more I knew that no other soundtrack would work for the film, that they were onto something unique, the sound was a very specific sound and the content told its very own story which was very relevant to the movie, too. I really liked that. Under Your Spell (Desire) perfectly captured the Driver and Irene’s relationship, and A Real Hero (College) was good in the sense that it caught important changing moments for the Driver. The soundtrack was amazing and the score just worked for each and every moment of the movie, and needs to be addressed on its own, it was something fantastic. It really built on the mood and seized emotions and embodied them for the scenes perfectly. It has been a while since I have seen a movie that just got it right down to a tee with the soundtrack. 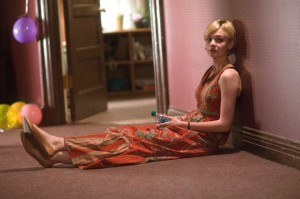 Quote: “That was my husband’s lawyer; he’s coming home in a week.” – Irene

A lot of people complained about the “excessive” violence in Drive, and I found that to be a silly complaint, and the violence was present, it was never overbearing. It was not constant, and when it came there was always method to the madness. I thought the cast was great, all working together in harmony. Gosling completely nailed the dark, silent and mysterious man, and when the Driver finally opens up, he brings that menace to the table so well you get chills. I did not expect that from his character so much. Yes, some form of darkness and brutality, but just the way that Gosling did it was wonderful. Carey Mulligan was perfectly cast as Irene, Oscar Isaac as Standard was good, it was nice to see Bryan Cranston conning people again, and he is a solid actor. Ron Perlman didn’t even really irritate me in here, and sometimes he just grates on me for some reason. Maybe it’s because he is ludicrous at the best of times? Albert Brooks was also fantastic as Perlman’s partner, and he was definitely the more likable of the two, definitely the one that thought things through more.

Quote: “You shut your mouth. Or I’ll kick your teeth down your throat and shut it for you.” – Driver

Who can forget about the elevator scene? It was just absolutely stunning! It changed so simply. It was illogical on one level (dude with a gun in the lift?!) and on the other (and this is the prevailing level) I really didn’t care, it gives me goosebumps without fail each and every time. The transition from beauty and love and finally breaking the tension for the world with like the most stunning kiss in history to sheer violence in a heartbeat was amazing. The camera work and the lighting and the sound all came together effortlessly to bring the scene together. It’s just wonderful to behold. This film shows time and time again that it contains inordinate amounts of style as well as wonderful directing. The pacing is just exactly what it needs to be, never too rushed and never pointless and never lagging. It keeps you interested from the beginning and never loses you along the way.

Overall it is evident that I am a huge fan of Drive and think it is one of the best films I have seen in a long time, and manages to ensnare a person effortlessly, drawing them in and sharing a dream with them, and it is a brilliant piece of cinema. It was gorgeous to look at, it had a soundtrack to boot to match it scene for scene, and it had a great cast, a solid plot and really good pacing. Alright, I will stop rambling. Drive is definitely worth the view every time.