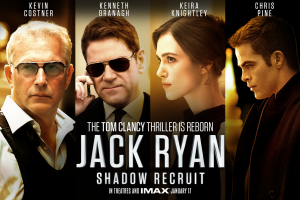 Brief Synopsis – A reboot of the Jack Ryan series.  As a deep cover analyst for the CIA, Ryan uncovers financial dealings that could topple the world economic market

My Take on it – The world has waited too long for a new adventure featuring Jack Ryan and it was worth the wait.

This adventure is done right.

It has the right amount of adventure, intrigue and action that any film of this genre should have.

The characters are all likeable (even the suave Russian baddie played by Kenneth Branaugh) and we learn to care for just about all of them as the story unfolds.

Chris Pine is great as Ryan but I kept waiting for him to give an order from the Bridge of the Enterprise.  After a while, I got used to him as Ryan and the image of Kirk slowly dissipated.  Fortunately, he now has taken on two very different roles that he can easily move back and forth between.

I was quite trepidacious that Kevin Costner would work here as Ryan’s mentor, but he seems to have been able to smoothly fit into the mentor/father figure role lately and thankfully has moved away from leading roles that he is no longer suited for.  He was also very good as Jonathan Kent in last year’s Man of Steel (2013)

I am very glad that this one worked well and I look forward to this being just the first of many new Jack Ryan films.

The only thing that bothered me about this movie was the fact that the characters seemed to move across the planet too swiftly and I felt that those parts just didn’t work as well as they could have.

Bottom Line – Very fun movie. Pine is great as Ryan (eventhough he reminds me of a certain Starship captain) :). Thriller done well that is hopefully just the beginning of a whole new series. Recommended!