For my next entry in this months Genre Grandeur – Crime, I present you with a review by Natasha of Life of this City Girl.  If you don’t already follow her blog, I strongly recommend that you do.  Her site features movie reviews, book reviews (Don’t know how she has time to read so much) :), TV show (and whole series) reviews and her Five things Friday series.

Thanks Natasha for joining in!

I am so excited to be blogging here today! I’ve always read and admired Movie Rob’s site, and especially these posts, but never got around to doing a post (a combination of laziness and laziness). When I saw that May’s Genre Grandeur was about Crime, I knew I had to send in something!

My experience with crime movies are on the rise. I’ve never really watched a lot of them in the past, but I enjoy them and it has been great fun discovering more serious movies. So I will share with you Lawless, a movie I adore. 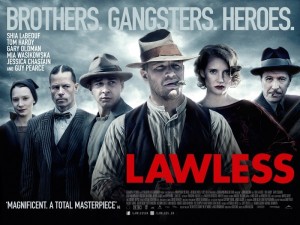 In 1931, Forrest, Howard and Jack Bondurant live infamously as men who cannot seem to die. It is hard times with the Prohibition still going strong, and the Bondurant brothers are making their money with a moonshine business in Franklin County, Virginia. They hide their dubious activities under owning a garage as well as a legitimate reason for their cash flow. The Bondurant brothers are aided by their disabled friend Cricket (Dane DeHaan), who has excellent ideas despite his deceiving look of incompetence. Cricket is especially good friends with Jack, the youngest and most insecure brother. Jack narrowly escapes death when he witnesses mobster Floyd Banner (Gary Oldman) shooting one of his competitors, and Floyd notices Jack but he gets away.

Forrest (Tom Hardy) hires Maggie Beauford (Jessica Chastain), a dancer from Chicago, as their new waitress. He is surprised that such a pretty girl wants to work there, but she assures them she only wants a quiet life now. Forrest isn’t an overly talkative fellow so he accepts it after the barest of questioning and Maggie settles into their business.

The gas station is visited by Special Deputy Charley Rakes (Guy Pearce). He tells Forrest that he wants a cut on all the profit made by the county’s bootleggers, something Forrest finds slightly amusing and declines to share. Forrest threatens to kill him if he returns to his property, and a furious Rakes leaves. Forrest convinces the other bootleggers to take the same stance as he did, but they soon become scared of the new Deputy and starts giving him a cut.

Jack becomes interested in the daughter of a Brethren preacher, Bertha Minnix (Mia Wasikowska). Her father forbids her to see Jack after he attends church drunk, but Bertha has some rebellion lurking under her placid exterior and it only causes her interest in Jack to increase.

Jack finds Rakes raiding Cricket’s house in search of distillation equipment. The deputy brutally attacks Jack and sends him with a message to his brothers and the other bootleggers. Forrest isn’t overly impressed that Jack allowed himself to get beaten up and tells Jack that he needs to stand up for himself.

Forest Bondurant: “Jack, look at me. We’re survivors. We control the fear. And without the fear, we are all as good as dead. Do you understand? – Do you?”

Forrest and Howard (Jason Clarke) plan to meet clients from Chicago, but Howard gets drunk and misses the appointment. Forrest walks in on Maggie holding a knife on customers, but Cricket tells Forrest that the mobsters held a gun on her. Forrest and Cricket beat them up and flee, but they return later that night and rape Maggie after they slash Forrest’s throat. 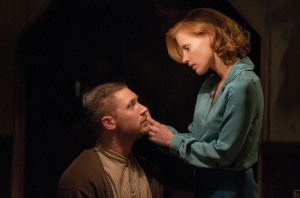 Forrest miraculously survives the attack and recuperates in hospital. Maggie doesn’t tell anyone what happened to her but wants to leave, but Forrest offers her a place at their house for her safety. She and Forrest soon start sleeping together. Jack and Cricket takes the remaining liquor across the country and nearly die when they are blind sighted by their customers. Floyd Banner saves them when he recognizes Jack, and they sell the liquor to him. Floyd, wary of the notorious Bondurant brothers, is worried that the brothers think it is his men and will take revenge. He assures Jack that although the men responsible for the attack used to work for him, they are now working for Rakes and it was under his orders that everything went down.

Forrest and Howard get their revenge on the two men and send essential parts of them to Rakes as a warning. The Bondurrant brothers flourish because of their business with Banner, and soon they are able to start a more sophisticated facility in the woods. Jack continues to woo Bertha and after giving her a present on a drive, he takes her to see the distillery. What happens next makes Jack unfortunately the silliest of the Bondurant brothers. He and Bertha are followed by Rakes and his men, and the place is ambushed. Howard, who saw that the ambush was going to happen, rushes to their aid and they escape. Cricket is later found by the Deputy Sheriff and murdered.

The town sheriff tries to talk to the Bondurant brothers and warns them that the road out of town is blocked. Jack, who took Cricket’s death the hardest, finally snaps and climbs into Cricket’s old car to go confront Rakes. Forrest and Howard follow him and an epic showdown between the bootleggers and equally criminal cops finally take place. Will the Bondurant brothers be able to survive once more? Will Jack avenge his friend’s death and end up happy with Bertha?

I had such a good time watching Lawless. It is easy to watch again and again, because there isn’t a dull moment. I loved the all out drama and how the tension between the Bondurant brothers and Rakes kept building. I did not find the guts and gore off putting, it was well placed and never unnecessary.

The attention to detail was fascinating. I particularly found Tom Hardy’s accent spot on, but every other cast member did well too. I even had some time for Shia LeBeouf. I am not a fan of the Beefster, because he is such a retard in the media and I do not enjoy attention seekers. He was not only tolerable in Lawless, he was enjoyable to watch, and I think he did a great job. Jack Bondurrant was the sweetest of the three brothers and he did everything with great passion. He was dedicated to his family and did what he thought best for them (and it wasn’t always necessarily), but everything he did was with the best intentions for his brothers. I found his courtship of Bertha adorable and how she in her sweetness fell for his crookedness. I think the only thing is more attention could have been given to the character of Howard Bondurant. He did not get enough show time and his development was the least throughout. He was good in his moments on screen, but he never had his shining moment.

The line between good and bad is blurred in Lawless. The Bondurant brothers are obviously dodgy characters you shouldn’t mess with, but rooting for the law is outright ridiculous with the Rakes as the main antagonist. Guy Pearce gave a stunning performance as Rakes, so evil under the polish.

Maggie and Forrest’s worldly relationship is the perfect contrast for Jack and Bertha’s courtship. I found both love stories good and how it was introduced as subplots and never took lead over the drama.

Dane DeHaan shone as Cricket. Cricket was the sweetest character and his death was most unfair. There was nothing bad about him and he was such an entertaining little thing. DeHaan is rising and quite popular these days and that is a good thing. He is a good actor with a big range of acting capabilities and I hope to see him more often.

Tom Hardy is a powerful thing to have in your movies because it has such a high chance of working out then. He is busy building an impressive resume (The Dark Knight Rises, Inception, etc.) and him as Forrest Bondurant brings another notch to that belt. I didn’t find a place where his accept slipped once and considering he is English, it is even more impressive. Forrest was very entertaining. He never said two words where only one was needed. He never seemed like a pushover and yet people constantly messed with him and his reactions were priceless to behold. He had scary and sweet moments and moments of pure miracle. I truly thought he was dead when he had his throat cut, and I found it funny that he actually thought he had walked to hospital with a slit throat.

If you haven’t seen this movie already, I suggest you give it a try  🙂

Thanks again to Natasha for her entry this month.

It’s still not too late to send me the review of your favorite Crime themed movie for this months Genre Grandeur.  All you have to do is email it to me at crime@movierob.net

I will be accepting reviews until next Sunday 25th May!

Looking forward to reading  (and posting) your thoughts!