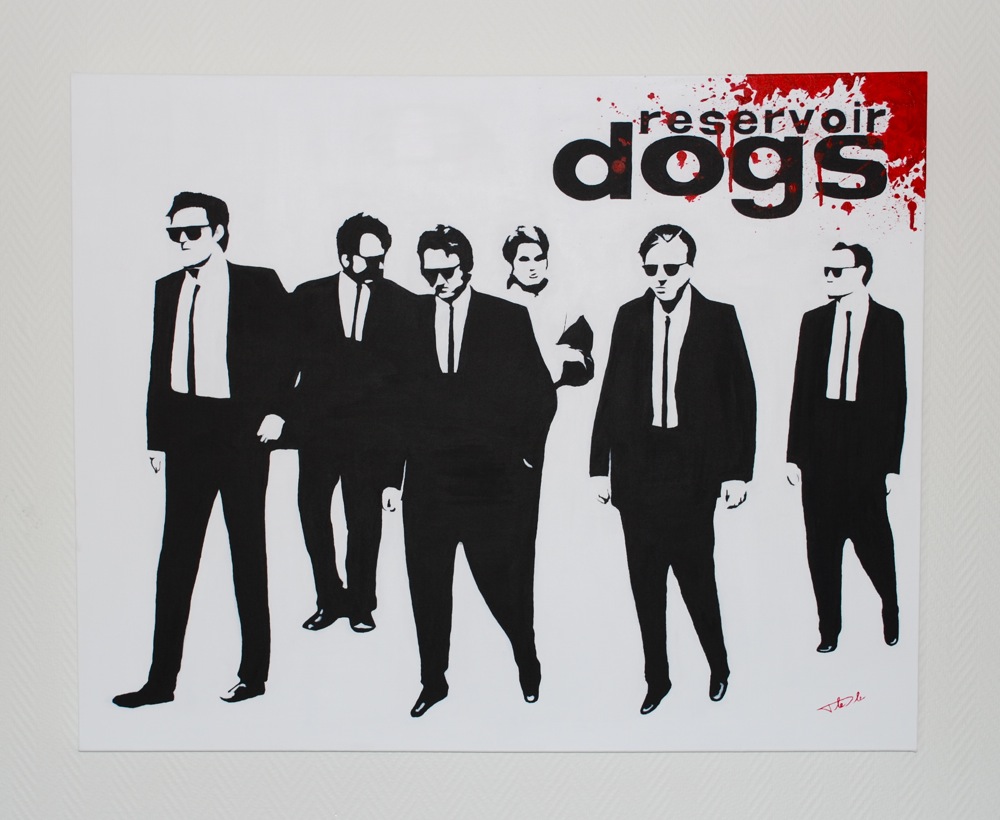 For the next entry in my Genre Grandeur for the month of May, I present you with a review of Reservoir Dogs by Niall of Silence, Cunning Exile.  He has some great posts including a series called A to Z, so go check it out.

It still isn’t too late for anyone else interested in joining in to this months Genre Grandeur – Crime.  Please send your review of your favorite film in the crime genre to crime@movierob.net by 25th May.

Take it away Niall…. 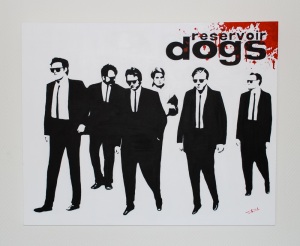 Has it really been more than twenty years since Quentin Tarantino shocked and thrilled audiences with his audacious, breezily confident debut film, Reservoir Dogs? The Sundance darling – it was one of the films that put ‘indie cinema’ squarely in the eye of the mainstream – put off many filmgoers because of its violence and alleged amoral stance (although, really, it has a moral, and a pretty unoriginal one: there’s little honour among thieves, and crime generally doesn’t pay), and almost immediately gained immeasurable cult status (with attendant myths: people still debate who shot Nice Guy Eddie, and to this day you meet who recall the ear-cutting scene in gruesome detail, when in fact the camera averts its gaze).

Cinema has changed dramatically since the early 1990s: anyone with an iPhone and a You Tube account can be a filmmaker now, and if you have bigger ambitions that require a bigger budget, there’s crowdfunding. And Tarantino is for better or worse the spiritual godfather of much of this new indie movement. After his debut and his follow-up, Pulp Fiction, there were an awful lot of ‘hip’ serio-comic crime movies featuring eccentric characters with funny nicknames, who liked to talk about junk food and pop music. Tarantino didn’t invent non-linear storytelling, but I imagine that the young writers of Lost and How I Met Your Mother thought he did. Christopher McQuarrie’s marvellous Oscar-winning screenplay for The Usual Suspects owes a little debt to Tarantino (and I think that film’s success is in many ways due to the fact that audiences were by now used to inventive, back and forth, keep you on your toes storytelling). There are filmmakers at work today who are blissfully – perhaps wilfully – ignorant of Truffaut, Godard, Huston and Hawks, but who regard Reservoir Dogs as some sort of patient zero of crime melodrama. That is a lamentable fact, but that isn’t Tarantino’s fault.

Besides, who could blame him for the cult status of Reservoir Dogs? It’s a brilliantly constructed cops and robbers movie, part heist flick (although in a brilliant conceit, we never actually see the robbery, just its planning and immediate aftermath), part gangster melodrama, part black comedy of errors, part undercover cop film. In a film replete with pop culture references, it’s worth remembering that the most important references are the ones not acknowledged. Tarantino, ahem, borrowed the plot of a Hong Kong cops and robbers film, City on Fire, structured it after Kubrick’s The Killing, and sprinkled in bits and pieces of countless other films he soaked up at that now infamous video store where he worked as a young man.

All these years later, I still think the film holds up. While it has some noticeable flaws and goofs of the sort that imdb nerds love to harp on about (a very obvious shadow of the boom in one scene, Harvey Keitel’s miraculously self-lighting cigarette),these are minor, perhaps even quaint, and are far outnumbered by the film’s delights (the endlessly quotable dialogue, the great work by the ensemble cast, the songs, Steven Wright’s droning voice on the radio, the sheer confidence evident in its direction and editing).

Will anyone ever be able to hear “Stuck in the Middle With You” without thinking of Michael Madsen shuffling across the floor, cut-throat razor in hand? It’s an incredible moment, at once sexy and disturbing. I remember seeing the film for the first time and watching that torture scene – that was how we talked about it: that torture scene – in a state of appalled glee. It’s both hilarious and horrible (which was Tarantino’s intent: in interviews he’s quick to point out that the same audiences who were repulsed by the sudden violence had been laughing just a moment before, which for him makes us all somehow “complicit”).

Of course, it wasn’t the violence that people objected to – there had been equally violent films before and have been many far worse since – it was the way the crooks thought of it as just a part of the job that got some people upset. Consider the following exchange:

Are cops not real people? No, not really, not in this world. We all know after The Wire that cops are in the game as much as robbers. And as any two-bit gangster will tell you, nobody wants to kill civilians: it’s bad for business. Tarantino was always proud of the fact that cops and gangsters thought very highly of the film and how realistic it was.

Was it though? I think it’s a marvellous film, but I don’t believe it’s a sincere crime film in the way that, say, The Big Sleep or Get Carter are. I don’t think the grim warehouse setting resembles a bare stage for no reason, and I don’t think that the theatrical nature of the story with its allegorical, colour-coded characters is an accident. Think of the film’s most daring moment: in the torture scene, in the middle of the song, Michael Madsen steps out of the warehouse, and the soundtrack drops. It’s almost like he stepped out of the movie to take a breather. Then he shuffles back in, the music comes back again, and we’re back. Tim Roth desperately wanted to play Mr. Orange because it was an acting part: he’s an English actor playing an American cop pretending to be a crook. Several of the songs on the soundtrack are not the original versions, but jaunty covers. Is that because the producers couldn’t afford the rights to the originals? Or is it a sly hint on Tarantino’s part to what Reservoir Dogs really is: a loving, off-kilter homage to the crime genre, the cinematic equivalent of a tribute band?

Thanks again to Niall for his contribution.