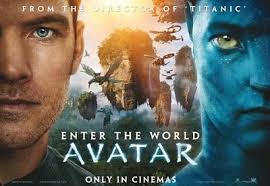 “Everything is backwards now, like out there is the true world, and in here is the dream. ” – Jake Sully

Brief Synopsis – A former marine who has no use of his legs volunteers to join a program meant to establish peaceful relations with the native inhabitants of a distant planet by use of modern technology and avatars.

My Take on it – I know that a lot of people have problems with this movie and its storyline, but the truth of the matter is that James Cameron has amazing vision for stories for movies (similar to George Lucas) but has trouble with the dialogue aspects.

The basic story is eerily similar to many other movies and stories from the past where a lonely man goes to a foreign culture, befriends them, falls in love and ultimately wants to fight for their cause.  Most recently, one can think of this as Dances With Wolves (1990) or Pocahontas (1995) or even The Last Samurai (2001) in futuristic outer space.

The special effects are unbelievable and Cameron once again brings his A-game here giving us a cinematic delight in just about every aspects possible.

This movie is currently the all time box office champ and it broke the previous record set by Cameron’s previous venture Titanic (1997) twelve years earlier.

The unfortunate thing here is that I believe that this was a stronger and better movie than The Hurt Locker (2008) and had the script been tighter and slightly more original it might have had a chance to win best picture.

Bottom Line – Very entertaining movie with amazing special effects but the story itself isn’t so original. If the story had been slightly stronger it could have definitely won Best Picture. Highly recommended!