For the first entry to this months Genre Grandeur, I decided to bat ‘lead off’ and post a review of my own in the Genre of Alien movies.

Anyone interested in joining this month’s Genre Grandeur can shoot me an email with their review to aliens@movierob.net before 25 July.

When Cara suggested this topic, the first thought that went thru my mind was oh no, how am I gonna think of a movie about an alien invasion that I liked and then I realized that the best way to do this was by thinking out of the box. So here is my review of one of my favorite movies from when I was a kid that involves aliens, E.T. 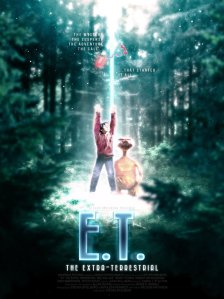 “We’re all going to die and they’re never going to give me my license!” – Michael

Brief Synopsis – A young boy befriends a strange alien accidently stranded on earth and their frirndship creates an extremely strong bond between them.

My Take on it – Whenever I watch this movie, I am transported back to the time(s) as a young 8 year old that I was fortunate enough to be awed in the theater by E.T. and his friends. (I truly don’t recall how many times it was) 😀

Steven Spielberg was able to once again create a movie that spoke so much to every viewer no matter their age or background.

This movie earned the most money of any movie even and held that record until Spielberg topped himself with Jurassic Park (1993) a little more than a decade later.

The univeral friendship created between Elliott and E.T. sent laughs and also tears to anyone watching.

Similar to when he made Jaws (1975), Spielberg once again had problems with animatronics, but eventually it thankfully worked out turning the animatronic E.T. into a household name.

It’s hard for anyone to forget the phrase E.T. phone home or the gaf that M&M’s made by not allowing their product to be used, paving the way for an amazing boost in sales to Reese’s pieces creating the very first movie product placement.

Bottom Line – Such a nostalgic piece of cinema for me that I can never get enough of. Spielberg once again hit a grand slam even with broken animatronics. Highly recommended!