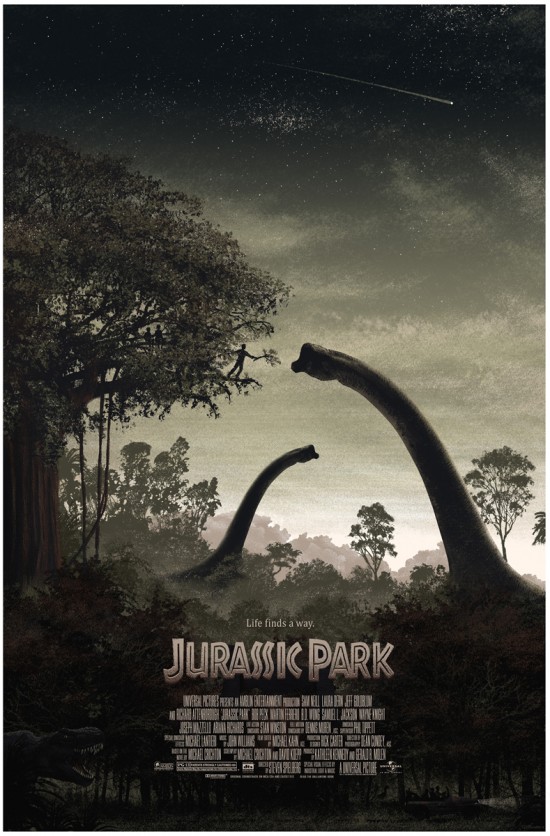 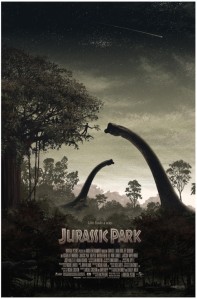 “Yeah, but, John, if The Pirates of the Caribbean breaks down, the pirates don’t eat the tourists.” – Dr. Ian Malcolm

Number of Times Seen – Too many to count  (Twice in theater on sequential days, cable, video, DVD and 13 Jul 2014)

Brief Synopsis – Days before a new prehistoric amusement park is to be opened, a group of scientists are given a tour in order to give their approval.

My Take on it – It’s actually been a few years since I watched any of the movies in this series and a conversation with my friend Kim from Tranquil Dreams sparked my interest in rewatching this.

I remember when this came out in the summer of 1993.  My friends and I were extremely excited to see this because of all the hype and advertising.  I loved it so much, that I went to see it again the following day because it was so cool seeing this on the big screen.

The special effects are done so well that ILM once again showed the world that they were (and still are) the leaders in effects in movies.  The way they rendered the dinosaurs via CGI made them seem as real as anyone had ever done up until that time.

This movie won 3 Oscars in technical categories: Best Sound, Best Effects – Sound Effects Editing, Best Effects and Visual Effects.  In 1993, Spielberg also won 7 Oscars for his other movie that came out that year – Schindler’s List (1993) giving him a total of 10 Oscars both two movies combined in the same year.

My favorite part of this movie tho is the music from John Williams; he found a way to make a film score that makes one think of the grandeur of nature, the unexplored outdoors and the awe of seeing this new beautiful island for the first time, every time you hear it.

It’s one of my favorite movie scores and I love listening to it over and over. Hear it here!

Thanks again to Kim from Tranquil Dreams for the inspiration to rewatch this trilogy.

Bottom Line – Amazing movie! Spielberg is a genius and the special effects are amazing.  A movie that should be seen on the big screen to get the best effect.  Excellent music by frequent Spielberg collaborator John Williams! One of my favorite themes of all time!.  Highly Recommended!