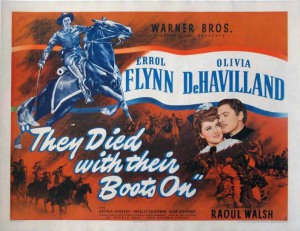 “We’re responsible for the protection of 100,000 square miles of territory. And against us are ranged thousands of the finest light cavalry on earth. I found that out this morning. It’s a big job, gentlemen… and it’s gonna need a fine regiment. Our job is to make this the finest regiment that the United States ever saw. I needn’t tell most of you that a regiment is something more than just six hundred disciplined fighting men. Men die. But a regiment lives on; because a regiment has an immortal soul of its own. Well, the way to begin is to find it. To find something that belongs to us alone. Something to give us that pride in ourselves that’ll make men endure – and, if necessary, die… with their boots on. As for the rest it’s easy: since it’s no more than hard work, hard riding and hard fighting. Thank you, gentlemen, I know I can count on you. ” – George Armstrong Custer

My Take on it – In the late 90’s, I became very interested in watching old movies and watched a lot of TCM.

I somehow came across this movie not knowing anything about it.

From the first time I watched this I became enamored with the epic battle scenes and with the performances of Errol Flynn and Olivia Dehavilland.

Some of the cavalry charging scenes were so grueling to film that numerous stuntmen were injured and 3 even lost their lives during filming.

As a history buff, it was great watching the historic events that Custer was a part of, in such detail.

This movie is slightly long and as great as it was, had they cut a few scenes it might have been even better.

Bottom Line – Great biopic with some epic battle scenes for the early 1940’s. Flynn is great in the title role. Highly recommended!