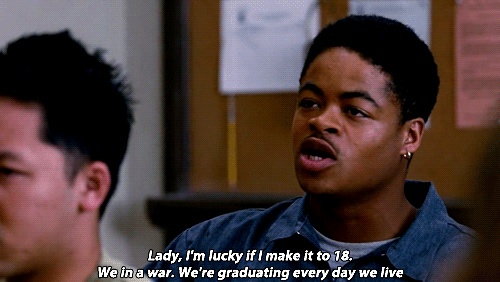 For our next entry for this month’s Genre Grandeur – War, here’s a review of Freedom Writers (2007) by Kim of Tranquil Dreams.  Her site is filled with movie reviews, travel pics and great recipes.  If don’t already follow her, I suggest you do so now!

If you’re still interested in joining in this month’s Genre Grandeur, send me an email to war@movierob.net by next Wednesday, 27th Aug.

On Sunday, I will send out an update of this month’s reviews (so far), plus reveal the new genre for September and the Blogger chosen to decide what genre will be featured! 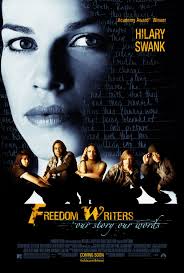 War movies are not really my genre. I’m really not much of a person who likes to watch movies based on historical events, especially that of war between countries or cities. Usually its depressing and just sad. Maybe you can call me ignorant but I’m fully aware of the wars in the past thats happened, the ones happening right now and that sort of thing. Its not just what I want. Just like why I wouldn’t listen to the radio first thing in the morning, its the same reason I try to minimize my war movie consumption. So, when Rob (and Niall) chose War movies, I paused and sat back to think about what would be suitable. My first thought went to 300. And up until the night that I was going to write this review on that, I suddenly thought about this movie: Freedom Writers.

Freedom Writers is the true story of a teacher, Erin Gruwell who enthusiastically went to teach at Wilson High School for their voluntary integration program to help students. However, she faced a lot more than she had expected when she learned that the class, the school and the students all were still living in the racial boundaries and a lot of them had their own stories. She gave them a way to express themselves through writing in diaries everyday and step by step, not only gained their respect but formed a family and taught them to see further and more objectively and fight through the wars they had to get through everyday. 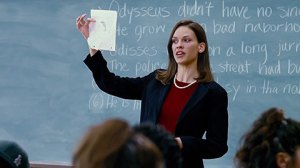 Freedom Writers is an underrated movie (to me). Its a really touching story because everyone has their own war. We always see wars in bigger contexts between countries but these teenagers are stuck in wars because of their background and for some, they don’t even really know what they are fighting for. They believe that holding up the fight and protecting their own is fighting for freedom.

Best recap by this quote: “I don’t even know how this war started. Its just two sides that tripped each other way back. Who cares about the history behind it?” – Eva, Freedom Writers

Everyone lives through some sort of inner wars and to watch them unfold in a movie, knowing its based on something that actually happened makes it even more personal. Whats great about Freedom Writers is that it draws on different backgrounds and each their own story and their own values. Having to break out of whatever war they are trapped in and find their own path and inspire change is so hard. This is why this is a war movie to me. Unconventional one, for sure, but still, in its own way, its a war. 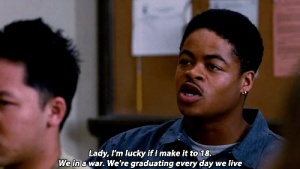 Inspirational and uplifting is how I’d describe it. I hope that you see how this is a war movie to me. Sure, if you want a conventional one, I’d tell you 300 but these are the wars fought in everyday lives. It could still be out there to a certain extent and someone is always fighting against something. After all, that is the definition of a war, right? Freedom Writers tugs on the audience’s heartstrings with this true story of a teacher and the troubled youths who each have their own stories and fight against what others view as their destiny. For that, its a worthy war movie and one, I think, deserves a watch.

Thanks again to Kim for this review