Here’s another review by Niall of Raging Fluff for this month’s Genre Grandeur – War.

It isn’t too late to send me a review for this month’s genre, just send it to me by Wednesday to war@movierob.net

Check out his thoughts on Gallipoli, one of Mel Gibson’s first films. 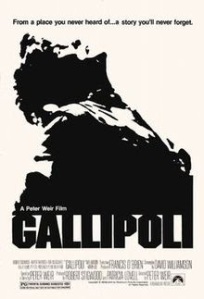 Summary: Two ANZAC soldiers in World War One face death in the Dardanelles

It’s a first world war film and it’s a bit of a downer so, fuck, yeah, spoilers.

Gallipoli is a film that wanders slowly and gracefully to its tragic finale, much as the characters do. Very little of the film is spent at the titular spot, that tiny dot near the Dardanelles that was the site of one of the greatest Allied blunders of the first World War. For much of the film we follow two young Australian men, both representing archetypes of WWI soldiers. One is a headstrong, ambitious, naive athlete who imagines that his success on the track will be equalled by a glorious victories in the war. He epitomises all the young men who joined up because the uniforms were spiffy or because a pretty girl’s head was turned by the sight of a smart-looking man on a horse. The other is a working-class drifter who joins the army because it represents a chance to escape a humdrum existence.

Part of the film’s success is in the casting of two young, fresh-faced actors, both brimming with talent. Neither looks old enough to shave. Mel Gibson is beautiful, energetic, mischievous and charming: you can see a glimmer of the mugging, forceful actor he would become. Mark Lee is more sullen, priggish, clever, but ultimately far more naive. Before he goes over the top, he gives himself the pep talk that his uncle used to give him before a race, and for a moment you think he might just have given himself enough of a boost so that he can run as fast as a leopard and make it.

Because the characters are so young and so young-looking, the film wisely spends a good deal of time treating them as teenagers: they do their best to clean themselves up with boot polish before a nice dinner; they horse around the Pyramids in Egypt like schoolkids on a field trip; there’s a stock scene of callow youths visiting a whorehouse. They’re still boys at the end, even as they’re asked to do a job that few grown-ups would do; there is no great character arc here. Gibson’s character, who survives, probably still thinks the entire campaign was a waste of time.

Only an Australian or New Zealander could have made a film like Gallipoli: it was predominantly ANZACs who fought and were killed there, and the name is etched in Antipodean cultural memory; more so than anybody else’s. Watch the original trailer for the film and listen to how the voiceover describes Gallipoli as “a place you never heard of”. Luckily for us, the film was made by an Australian, and not just anyone, but that most sensitive of Australian directors, Peter Weir, whose anti-war sentiment is clear. There is no glory in this film and no chance of anyone being fooled into thinking that there might be. Like Kubrick’s Paths of Glory, it thinks patriotism is bullshit and it lays the blame for thousands of needless deaths squarely at those generals miles and miles away, who blindly and stupidly order an attack to gain a few yards. It is a rebuke to Horace’s idea that it is a great and noble thing to die for one’s country.

The film has moments of lyricism and much beauty, but at times is rather heavy-handed in playing out the whole doomed youth thing and tugging at your heart strings; it makes extensive use of Albinoni’s Adagio in G Minor, one of the saddest pieces of music you will ever hear. When you hear it on the soundtrack, it’s the musical equivalent of a sign reading PREPARE TO START CRYING. When filmmakers get sick of using Samuel Barber’s Adagio for Strings, they’ll start using the Albinoni piece again.

Still, though, I love Gallipoli; it is sentimental in the best way, and sometimes a good cry is just what you need. Thirty years later Weir would make a far more robust but equally lyrical war film, Master and Commander.