For our 48th review of Hitchcock’s filmography, here’s a review of The Birds by Eddie from Sidekick Reviews.  If you don’t already follow his site, I urge you to do so since he has some great insight into lots of movie and TV shows.

Let’s hear his thoughts on The Birds 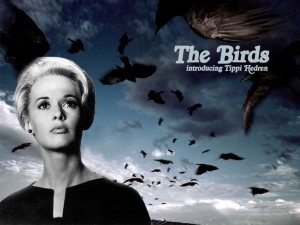 Three years after Alfred Hitchcock shocked movie goers around the world with 1960’s Psycho, the master of suspense returned with The Birds. By today’s standards, The Birds doesn’t have the level of gore associated with modern natural horror movies. To me this makes The Birds all the more special in how Hitchcock uses many other cinematic techniques to generate genuine tension. Don’t get me wrong, there is an unexpected gross out moment that made me say “eww” out loud; however, Hitchcock doesn’t rely on cheap thrills to scare audiences.  Overall, The Birds is a sophisticated and entertaining take on “mother nature versus humanity”.

The set up is well done. Melanie Daniels, a mischievous socialite, drives out to a small bay side town to pull an elaborate prank on a handsome lawyer she recently met. Daniels goes to great lengths to track down this practical stranger and even though she may not realize it yet, it’s evident she’s enamoured with him. The best compliment I can give the screenplay for taking the time to set up the story is that not once did I become impatient and think “Come on, I just want to see the birds start attacking everyone”.

It’s entertaining how Daniels’ prank becomes increasingly intricate which functions as a clever way to establish her character and at the same time build her relationship with several of the small town inhabitants she meets. I would not have guessed this is Tippi Hedren’s, mother of actress Melanie Griffith, first movie role. She puts on an impressive star-making performance.  There’s a wide range of emotions and personality traits for Hedren to convey and she doesn’t miss a beat.

On a side note I’d be remiss if I didn’t briefly bring up in a Hitchcock blogathon Hedren’s experience working with Hitch. It’s quite fascinating learning about how Hitchcock allegedly behaved behind the scenes. In fact, there is a 2012 HBO movie titled The Girl, starring Sienna Miller, depicting Hedren as the object of Hitchcock’s obsession. According to Hedren, after rejecting the director’s lewd advances Hitch subjected her to trauma. For instance, in a pivotal scene, instead of using mechanical birds, real live birds were chained and hurled at Hedren for several days until Hitch was satisfied with the authenticity of her reactions.

Speaking of birds, they are like a character. Even though they don’t become a lethal threat until the second half of the movie, the birds do have an ominous presence right from the opening shot. The screenplay smartly depicts the birds at times as a force of nature than can turn malevolent in an instant and other times like an indiscriminate killer breaking into a boarded up house. Though many of the town’s people have their theories, there is no definitive explanation given as to why the birds are viciously attacking humans which adds to the fear factor of random acts of violence.

Let’s talk about some of the tools of the trade Hitch uses in The Birds. Hitchcock slowly builds the tension over a series of escalating attacks. As cool as it is to see the birds go berserk, the most griping moments for me are the scenes featuring an enormous flock of birds perched in stillness, possibly about to go on the attack. This brings to mind Hitch’s famous quote on “The bomb under the table” about the difference between suspense and surprise. The ending has a vague post-apocalyptic undertone which I appreciate. It left with me an eerie, unsettling feeling. By not having everything wrapped up neatly at the end it retained both the suspense and the elusive mystery of the birds.

The Birds holds up well over the decades but I do have some very minor nit picks. In horror movies it bugs me when a character does something moronic that puts them in greater danger in order to move the story along. There is a moment like that in the Birds however the pay off is a very good attack sequence. The special effects are mainly seamless but there times that I notice how the background in some action scenes were shot separately and then combined with the foreground.

I’ve been a fan of Hitchcock since watching Rear Window on television as a kid and that movie still ranks up there among my all time favourites. The Birds is not on the same level as Rear Window but on its own merits, it is deservedly recognized as one of the last great movies Hitchcock directed. Although, The Birds is not very scary to me it does have its share of thrilling moments. I also enjoyed the quieter parts of the movie that explored the characters and their relationships, something a lot of modern horror movies neglect to do. I’d easily recommend The Birds to any curious movie fan, it’s well worth the time to catch up on this classic.