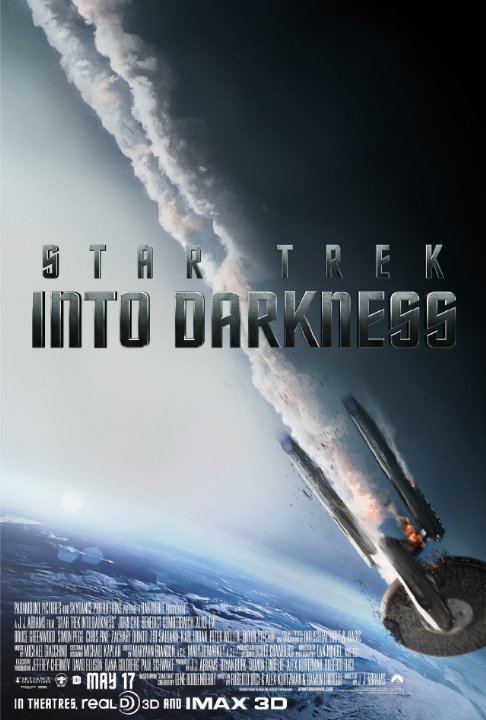 Here’s a review of Star Trek: Into Darkness from Cara of Silver Screen Serenade for this month’s Genre Grandeur – Space.

It still isn’t too late for anyone still wanting to participate in this month’s Grandeur.  Just send me your review by next Sunday, 28th September to space@movierob.net and I’ll post it before the end of the month.

Let’s see what she thought of it!

“You’re right! What I am about to do, it doesn’t make sense, it’s not logical, it is a gut feeling! I have no idea what I’m supposed to do. I only know what I can do.” – Kirk

Brief Synopsis – “After the crew of the Enterprise find an unstoppable force of terror from within their own organization, Captain Kirk leads a manhunt to a war-zone world to capture a one-man weapon of mass destruction.” (from IMDb)

My Take On It – Okay, can I just point out how impossible it is to pick one favorite—heck even multiple favorite—space movies?? There are a ridiculous number of amazing ones! I considered going the epic Star Wars route. There was also the tense Gravity option. And, of course, it’s hard to rule out a Pixar classic like WALL-E. But ultimately, Star Trek: Into Darkness seemed like right choice for me.

Prior to 2009, I never really cared one way or the other about Star Trek. I knew the names of the characters, and I knew that William Shatner’s Captain Kirk was one of the most parodied characters ever due to his…disjointed…way of…speaking (see what I did there), but that was about it. Then J.J. Abrams came along and blew me away with this fantastic reboot, and I was all, “Heck yeah Star Trek!” A lot of people seem to prefer the 2009 film, but for me, Into Darkness is the winner.

Not being a true Trekkie, I feel like it’s not my place to compare the rebooted characters with their original counterparts, but from what I understand, fans of the show have been pretty happy with these new folks. I, for one, love them. Chris Pine is spot-on as charming, funny, fearless leader Captain James T. Kirk. Zachary Quinto is equally awesome as his buddy Spock, a calm, logical half-human, half-Vulcan with lots of strong emotions bubbling under the surface. I’m quite a fan of Zoe Saldana’s tough Uhura, who isn’t afraid to put herself in the line of fire. Karl Urban’s Bones and Simon Pegg’s Scotty are nearly constant sources of laughter. Anton Yelchin is just about the cutest little Chekov ever, and John Cho’s Sulu is a steady, reliable helmsman.

So that’s the crew of the USS Enterprise, but can we take a second to talk about what an awesome villain Benedict Cumberbatch is? There’s a twist with the identity of his character that I don’t want to ruin, but he plays a superhuman terrorist who is ruthless, brilliant, and just too friggin’ cool. They could not have cast anyone better. Throw in Bruce Greenwood as Admiral Pike, a father figure to Kirk, and Peter Weller as Admiral Marcus, the big man in charge, and it’s quite a cast.

Of course, no space adventure would be complete without some kickass visual, and this film certainly doesn’t disappoint. Into Darkness includes an epic space battle, a warp speed chase, a raging volcano, more destruction than you can shake a stick at, and so much more. That’s not even mentioning hand-to-hand fights, of which there are many. Let’s just say Cumberbatch gets a workout.

Honestly, I can’t find a whole heck of a lot to pick on with this film. I will say that one character has an evil agenda that is kind of ridiculous and, perhaps, not explained very well. Another character is saved from certain death very, very conveniently. Just tiny issues here and there. My biggest qualm is probably this: the use of Carol (Alice Eve). Introduced in this film, she ultimately doesn’t serve much of a purpose. She does get one pretty important task, but other than that she seems to be there mostly for eye candy. I can think of one moment in particular where she’s just standing there in her underwear for no damn reason. Every time that scene comes up, the pissed off feminist in me can’t help muttering, “Objectified much?” But that’s a can of worms you probably don’t want me to open. Haha.

Bottom Line – Star Trek: Into Darkness is an exciting sci-fi adventure that has everything you could possibly want—action, drama, comedy…even a little bit of romance and a LOT of bromance. The cast is superb, the story is clever, and the effects are pretty darn awesome. From what I gather, this seems like a worthy addition to the Star Trek canon, but I’d say it’s a worthy film all on its own, too. I enthusiastically recommend it! But for the full effect you should probably watch its predecessor, too. 😉

Thanks again to Cara for this review!