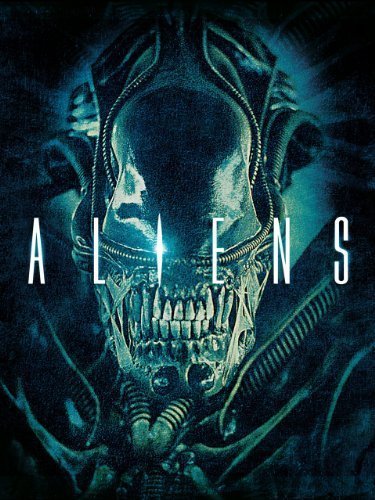 Here’s another post for this month’s Genre Grandeur – Space.  This time, Let’s hear about James Cameron’s epic tale Aliens (1986) from Kieron of What About the Twinkie

I have already chosen next month’s Genre and it will be biopic movies, so if you’d like to participate, just send me an email to biopic@movierob.net by 25th October and I’ll post it.

Take it away Kieron…….

Director: James Cameron Starring: Sigourney Weaver, Michael Biehn & Lance Henriksen Synopsis: “The planet from Alien has been colonized, but contact is lost. This time, the rescue team has impressive firepower, but will it be enough?” Rating: 15 Runtime: 137 minutes

Few sequels are ever as good as their predecessor, and most film franchises suffer the longer they go on. While the latter may be true of the Aliens film series, the former certainly is not. Aliens is not only as good as Alien, it is actually better. While most sequels toe the line and simply act as an excuse to print money for the various film studios, Aliens is that rarest of things and is better in every conceivable way.

Aliens was directed by James Cameron, and is set some 56 years after the events of the first Alien film. Our hero, Ellen Ripley (Sigourney Weaver) is awakened from stasis by a deep space salvage team and is soon being interrogated to establish what really happened in the first film. No sooner has she been deprived of her space flight license, is she being asked to go back to LV-426 where the events of the first film took place. Only this time, she is going in with a squad of highly trained marines.

This is the reason why I love Aliens, the marines. From the moment they wake up to the moment they all realise they are in way over their heads, it’s the marines who really make this film work. Whether it be Sergeant Apone rousing his troops, or Private Hudson delivering a sarcastic retort, or Private Vasquez proving herself to be more of a man than some of her squad mates, their camaraderie and the way they taunt each other prove to be the films most quotable lines.

Aside from the infinitely quotable material there is a real sense of tension brought to proceedings by director James Cameron. Aliens was only his third directorial effort at the time, but after Piranha: Part Two and The Terminator, Cameron already felt like an accomplished director. He gets the best out of his cast, and manages to craft a story that compliments the first film and its events, but also manages to work as a standalone film as well. It’s here that we see his ability to create a true blockbuster that mixes an engaging story and memorable characters with special effects.

Aliens is approaching it 30th anniversary, it was made in 1986, and while some of the effects may look dated now, the film has truly stood the test of time. The film blends special effects, great action, characters that matter and features some of the most quotable film dialogue you will ever come across to make a truly classic film.

In summary: Despite being nearly 30 years old, Aliens lives up to its reputation and even with various sequels and prequels being released over the years, it remains the high point of the series.

Thanks again Kieron for this epic review of what I think is the best in the series.