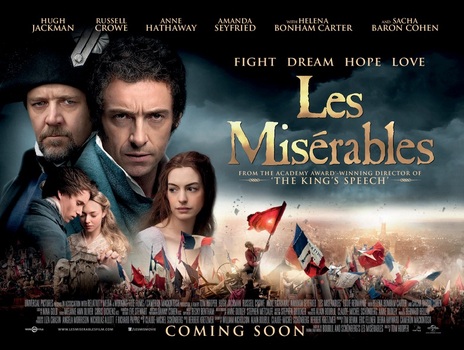 This is my second of three reviews for the Stage to Screen Blogathon hosted by The Rosebud Cinema and Rachel’s Theater Reviews. You should check out all the great posts for this blogathon listed on their websites. Thanks again for allowing me to participate!

“This is the land I fought for liberty, now when we fight, we fight for bread… here is the thing about equality, everyone’s equal when they’re dead. ” – Gavroche

Brief Synopsis – A fugitive from the law who has been living under an assumed identity for years after turning over a new leaf decides to help a former employee by caring for her daughter.

My Take on it – I saw this on the stage in 1990 and knew absolutely nothing about the storyline beforehand and immediately fell in love with it.

In ’92, during my year abroad, a friend had the soundtrack and we would listen to it nonstop. The songs have been etched in my brain ever since and ranks among some of the best musical songs ever.

The characters are very familiar to me and I think the majority of the casting for this film is excellent.  Hugh Jackman is a perfect Jean Valjean and Russel Crowe who seems very miscast actually is pretty good as Javert.  The best casting choices were of the couple Thenardier; Sascha Baron Cohen and Helena Bodham Carter both steal every scene they are in as the dastardly couple.  Can’t forget to mention Anne Hathaway’s short (but amazing) performance of Fantine which earned her a Best Supporting Actress Oscar.

The transition to screen is amazing because it gives the story much more depth and OOMPH than it does on the stage and they managed to take such a great play and adapt it perfectly for the screen.

This story has so many very strong messages related to hope, forgiveness, fighting for what you believe and dreaming of a better world.

IMHO, this was the best movie of 2012 and not even Oscar winner Argo (2012) could top this one in being the best made movie of the year. Unfortunately, the Academy didn’t agree with me on this one.

Bottom Line – Amazing musical that works even better on the screen because it adds depth and poignance to various scenes. IMHO, the best movie of 2012. Great cast and very memorable songs. Highly recommended!

16 thoughts on “From Stage to Screen Blogathon: Les Miserables (2012)”