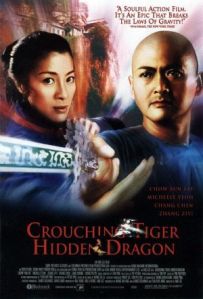 I would rather be a ghost drifting by your side as a condemned soul than enter heaven without you… because of your love, I will never be a lonely spirit” – Li Mu Bai

Brief Synopsis – When a famous sword is stolen, two martial arts experts go on a journey to retrieve it.

My Take on it – I recall when I saw this in a theater in Manhattan at the beginning of 2001 and being so wowed by the way this movie was made.

Ang Lee was able to successfully take a martial arts movie and use special effects to make it seem more like the characters have powers that allow them to seemingly defy gravity.

They are able to easily scale walls to get to the rooftops or even make themselves weightless when they sword fight atop trees in a forest.

The fight scenes are choreographed so well that it seems as if they are all dancing during their smooth and graceful movements.

The story is great and the way that it is presented, it could possible appear to be a tale from the Orient of the past or from a new magical and mystical world.

This is one of the movies major strengths because the viewer regardless is transported into another world for two hours.

This movie was the first (and only so far) martial arts movie to be nominated for best picture at the Oscars.

It also currently holds the record of the most Oscar nominations for a non English language film at 10. (It won 4).

There can be a case made for this movie being better than Gladiator (2000), but in the end, the acting here isn’t as good as it was there, so it’s no surprise that this didn’t win best picture.

This movie also still holds the record of being the highest grossing foreign language film in the US.

The movie’s music is very moving and although it didn’t win best song that year for A Love Before Time, it did win Best music Score.

Here’s a video of the song, a clip from the performance at the Oscars and one of the theme music

Bottom Line – Amazing movie that has a great mythical tale, superb fight scenes that are unbelievably choreographed and an other worldly feeling that makes one feel breathless when it eventually ends. Highly recommended!