Next month’s Genre chosen by Kieron of What About the Twinkie? is 80’s action flicks, so send me the review of your favorite film in that genre by 25th Nov to action80@movierob.net and I’ll post it.

Let’s see what Justine thought of this movie… 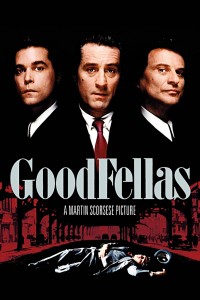 Next to The Godfather trilogy, I’d say that Goodfellas is one of the greatest American gangster movies ever made. When I think of it that way, I almost forget that unlike The Godfather, it’s not just a gangster movie, it’s a biopic on the life of a real man, Henry Hill. Hill was an associate of the Lucchese crime family in New York City. He became well known for being a rat, giving up his friends to the FBI and testifying against them, securing the convictions of fifty fellow mobsters. When you take a story like that, turn it into a script, get a talented ensemble of actors and put none other than Martin Scorsese at the head of it all, you get a truly entertaining take on the life of a real American gangster.

The movie opens with Henry (Ray Liotta) and his two closest friends, Tommy (Joe Pesci) and Jimmy (Robert De Niro) driving in a car. Upon hearing some banging noises in the trunk, Henry stops on the side of the road and they all get out. They open the trunk and there’s a bloody body in there of a guy who is still barely alive. Tommy pulls out a knife and stabs him a couple of times and Jimmy proceeds by pulling a gun and shooting the guy. Henry, with a blank look on his face, is about to close the trunk when the frame freezes, and you hear Ray Liotta’s voice narrating, “As far back as I can remember, I always wanted to be a gangster.” That’s pretty much the set up of the tone and the story for the whole film.

Goodfellas is based on Nicholas Pileggi’s non-fiction book Wiseguy: Life in a Mafia Family. It follows the life of Henry Hill from 1955 to 1980. The story jumps back and forth between timelines, but it’s clear from the opening scene, Henry wasn’t exactly ready for everything being a gangster entails. He admired gangsters since he was a young kid, growing up in a family that didn’t have much, seeing these wiseguys running the town and getting everything they wanted. What we learn throughout three decades of his life is that being a gangster might’ve looked cool from the outside, but once you’re in, it’s a lot more gritty, scary, violent and complicated than even he probably had imagined. In a world of nothing but criminals, nobody can trust each other, that world is filled with fear, paranoia and betrayal. Henry Hill not only learns this, but becomes this. He eventually becomes paranoid that his “friends” are going to take him out, on top of that, he’s afraid of the FBI. In the end, people will save their own ass, and that’s exactly what Hill does when he becomes an informant and betrays the people he’s known almost his whole life.

Goodfellas is a prime example of Scorsese’s classic filmmaking style. Everything fits like a glove, from the soundtrack to the camera movements to the use of colors. You’ve got the 3-minute tracking shot that follows Henry into the Copacabana club where he takes his future wife, Karen (Lorraine Bracco) on their first real date. It follows him as he walks through a back door, through a kitchen, as people greet him by name. It’s a perfect shot, and so well done, it gives the viewer the sense that this is Hill’s high point in his life, he’s a big shot, and everyone knows him.

Colors are meaningful to the tone of the film as well. The constant use of the color red is symbolic of the violence in the movie. Even in the opening scene, with Billy Batts (Frank Vincent) in the trunk, you’ve got the red tail lights reflecting off of the faces of Henry, Tommy and Jimmy. In the scene later on when they attack him, the bar is decorated with red balloons on the wall and a red carpet on the floor. The great amount of details in this movie are hard to miss after having seen it so many times. In addition to all of this, the sets, the costumes, everything works so well to drop you right into whatever era is being shown. This is just a good example of great filmmaking.

Of course, the performances are like the cherry on top of this already perfectly made sundae. Jimmy Conway is one of my top five favorite Robert De Niro roles of all time. On the surface, he seems calm and collected, but deep down he’s just as paranoid as anybody else. He’ll pretend to be your friend, but he’ll most likely kill you at some point–De Niro is perfect for this kind of role. Joe Pesci is just as perfect for his role as Tommy DeVito. He’s the little guy with a big mouth. If anyone was born to play a loose cannon, Joe Pesci is it. He’s arguably the most fun to watch in the film, because you never know what he’s going to do, he’s darkly humorous and you almost feel bad for laughing at his reaction to things because his reactions are sometimes lethal. I don’t know how accurate their portrayal is of the real Jimmy Burke and Tommy DeSimone (names were changed for the film), but if they’re even remotely close to what we see in the movie, then that’s a bit scary, to be honest.

This is my favorite role of Ray Liotta, and is a really iconic one for his career. The only problem is that he’s sometimes outshined by De Niro and Pesci. For anyone who has watched the HBO series The Sopranos but has not seen this movie…well, for one…WHY?! But more importantly, you’ll see that Lorraine Bracco is capable of doing a lot more than sitting in a chair and listening to Tony’s problems. She’s amazing in this, and you can see her transformation from a naive and innocent Jewish girl into the wife of a deranged mobster.

The real Henry Hill died two years ago in 2012 at age 69. After his testimony against his gangster pals, he spent years in the witness protection program and never stopped looking over his shoulder. Goodfellas, he claimed, was 95% accurate in its portrayal of events. There’s plenty of people who hate Henry Hill for being a rat, but one thing’s for sure—because of the genius and hard work of Martin Scorsese, as well as the actors and the writer of the book/screenplay, Hill’s life was adapted into one of the best biopics and gangster films of all time.

Thanks again to Justine for this very informative review!