For today’s first review of Casino Royale (1967), here’s Anna of Film Grimoire with her thoughts on this Bond spoof. 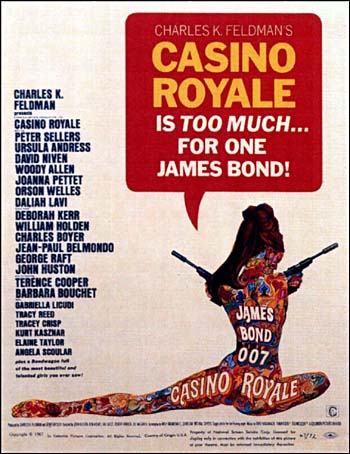 In Casino Royale (1967), a blatant spoof of a certain famous secret agent and his adventures, James Bond (David Niven) has retired from arduous work to live a comfortable life in a giant mansion. However, when the political powers of the world visit and ask him to come out of retirement in the face of a new threat, he proposes that they train up other spies to be as skilled as he is; in spying, drinking, card playing, and in responding to the many and varying needs of women. Casino Royale very loosely follows Ian Fleming’s book of the same name, where Bond must defeat the mysterious Le Chiffre (Orson Welles) at the elegant game of baccarat. Only this time, it’s completely ridiculous, and a slight trainwreck.

When I mentioned to my James Bond obsessed partner that I was watching the 1967 version of Casino Royale for this blogathon, his immediate response was, “But it’s not canon!!!”. Indeed, this Casino Royale is not technically a part of the Bond movie franchise, as it wasn’t made by Eon Productions. However, it does form an essential part of the Bond universe, and I’m sure that most hardcore Bond fans would have watched it at some point in time. The problem, though, is that it’s just not that great. The film is exceedingly silly, with a strange, very British sense of humour – lots of dryly clever jokes coupled with slapstick and puns. I would compare it to Monty Python, but Monty Python is much funnier.

Casino Royale is filled with quite the star-studded cast. Firstly, the original James Bond is played by David Niven, whose classiness and charm is undeniable. Peter Sellers’ stand-out performance as Evelyn Tremble slash another James Bond was one of my favourite elements of this film, and familiar Bond girl Ursula Andress as Vesper Lynd is also very memorable for her beautiful face and surprisingly humorous line delivery. I think my favourite cast member was Woody Allen, whose portrayal of Jimmy Bond, the original Bond’s nephew, was his typical neurotic fare – but couple this with his surprise role in the film (not spoiling anything), and you get probably the funniest performance of all. Orson Welles isn’t your typical vision as Le Chiffre (particularly considering Mads Mikkelsen’s performance in the most recent Casino Royale), but he seems to make the role his own, and is also a surprise magician who performs tricks at the card table. Rumour has it that he and Peter Sellers hated one another so much that their scenes had to be filmed separately, and it shows.

As aforementioned, Casino Royale is a bit of a mess. There were six directors involved with the project – Ken Hughes, John Huston, Joseph McGrath, Robert Parrish, Val Guest, and Richard Talmadge (though he was uncredited). Each director was in charge of different scenes, and then all the scenes were stitched together. I’m unsure that this was intentional, as a quick read-up on this film’s history tells me that the production was generally fraught with difficulty. When it comes down to it, you can tell that several different directors were involved with this, as the film looks totally different from scene to scene. Some scenes are funny, some are an attempt at a good spy thriller. Some scenes are shot upside down or in slow motion (particularly where Peter Sellers is involved), and some are filmed in a fairly standard way. The good news is that no matter the directorial quality of the film, at least the music is always excellent, and there’s usually some great costume or set design to distract you.

In terms of the concept of ‘spoof films’ and where this would rank on the spectrum, as a concept it’s fairly strong, it’s just that the execution is not there. If its production had progressed more smoothly, perhaps the film would be more coherent; or if its main stars had not despised one another, perhaps the conclusion of one character’s presence in the film would not have occurred so abruptly. If everything had worked out behind the scenes, perhaps the ending would have not been so completely ridiculous. Woody Allen was once quoted as saying, “I never bothered to see Casino Royale. I knew it would be a horrible film. The set was a chaotic madhouse.” He’s being quite critical here, but at the same time, it makes a lot of sense.

The good news is that if you love explosions, then this is your film. And if you love puns (such as the time a rogue toupee is described as a “hair-loom”), then this will be two hours of constant hilarity. But if you’re a huge Bond aficionado, I think you may be equal parts entertained and frustrated by this. Casino Royale makes a lot of in-jokes about the series and the humour references both the Bond books and films. There are lots of visual gags, which can be fun to spot. But this all depends on whether you are able to tolerate two hours of nonsense, which not a lot of people are able to do.