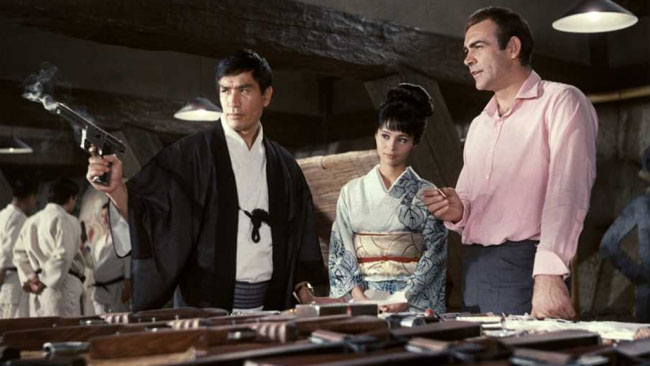 For our second review of You Only Live Twice (1967), here’s a review by Kim of Tranquil Dreams.

Before I start the review, I’d like to say that I’m not very well versed in James Bond.  I watched maybe two Pierce Brosnan ones and then the first two Daniel Craig ones. When Rob decided to do this 007 blogathon, I struggled a little to decide whether I should do this.  Still, I ended up with Sean Connery’s James Bond.  I have no idea what to expect so lets give this one a look, shall we? I’m sure it’ll be an interesting experience.

The US launches a space capsule which gets captured by an unknown ship.  They believe its the Russians plot.  When the Russians also lose a space capsule in space unexpectedly, the world is about to break into war as fingers are pointed at each other.  Special Agent 007 in turn fakes his death to come out to investigate these events, hoping to race against the next launch and capture and find out who is behind it before war happens.

It seems like its a really good choice (on Rob’s part) to have watched this now. Especially since I just landed on some rumored casting news that Christoph Waltz is going to play Blofeld in Bond 24.  I don’t keep track of Bond news deliberately so is there any change in that? Is it true? Anyways, if Blofeld is going to be in the new Bond, then I’m probably going to want to know who this villain is and what he is all about.

I know nothing about the older James Bond and one thing is for sure, right away, the difference from the old and the new ones is the pace.  This one is so slow and it feels so long. The story itself is laced with decent characters and some pretty girls that have sporadic romantic encounters with James Bond. I’m still trying to think if I actually feel like Sean Connery does well as James Bond.  He does have charm and all but I don’t know, something doesn’t click.  Maybe its the generation difference.  I’m so used to the newer ones that this one feels weird to watch.

You Only Live Twice is kind of a two part deal.  The first part is a build up of the story and the second one is chasing down said villain and its final reveal of who is behind this whole thing.  I don’t even know if Blofeld was in any previous Bond movies.  I feel like I can’t really judge this movie on that.  Either way, the second half is much more fun than the first one.

I really enjoyed the whole Japanese culture and the ninja.  The Japanese culture thrives in this one and even though it is dated, they do include some interesting gadgets which keeps this very much Bond-esque.  Like I said before, I really liked the second half.  It also helps that by the end, I started being a bit more adapted to Sean Connery’s Bond and it was very neat to see how it all wraps up.  Every good thriller has a good villain and I think that its done very well in that sense.  Blofeld is a great villain. Plus, I always get a good laugh when the movie adds dialogue with the title, reminding us that we’re definitely watch that movie and the reason why its called that.

Overall, I’m not exactly sure that I’d watch You Only Live Twice again (or frequently, for that matter). The pace bothers me a little and the slow start does also. I’m still embracing the fact of Sean Connery’s Bond (but thats okay, I have another one to bond with that character).  Still, there is no doubt that the second half makes up for all the fun missed in the first half and brings it in with a nice finish.