Once again, for today’s first post, here’s Luke from Oracle of Film‘s take on The Man With The Golden Gun (1974) 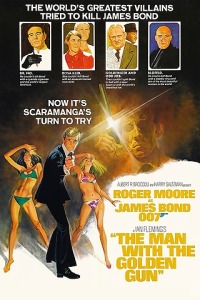 THE MAN WITH THE GOLDEN GUN

You get as much pleasure out of killing as I do, so why don’t you admit it?

Brief Synopsis: Bond is taken off a case, when intel reveals that the world’s deadliest assassin is after him.

My Take on It: My favourite Bond bad guy is easily Red Grant from ‘From Russia With Love’. He was Bond’s equal, just with the unfortunate disposition of working for the bad guys. It made that train scene so amazing, because it was the first time Bond felt challenged. With The Man With the Golden Gun, we could argue that the writers take that concept and apply it to an entire movie.

The best thing about Man With The Golden Gun is Christopher Lee. The difference between Moore’s films and Connery’s is that the villains are given more to do. Most of the time, they were set-pieces, even Blofeld being rejected to standing around delivering clichéd monologues. Moore’s era has some great actors making the bad guys much more three-dimensional (Walken, Glover, Berkoff). Christopher Lee does very well at almost channelling James Bond. Squint and you can kind of see Lee playing Bond himself, flattering the women around him and being confidently adept at any weapon he has in his hands. It is his darker side that makes him villainous and there are times, when we can almost see Bond slipping into that dark side. Roger Moore actually puts in a decent performance, especially one scene where he slaps a Bond girl around for information.

For the most part, this is a very decent Bond film. It just seems intent on ruining itself. The car chase in this film could very well be one of the greatest in Bond history, but it is never allowed to win that title, because too much comedy is played into it. Sheriff J.W Pepper returns for little to no reason, cameoing as the backseat driver, always firing stupid comment into the mix. A 360 mid-air loop is amazingly directed, until someone decides to stick some stupid sound effects over it. Then there is Mary Goodnight, one of the worst Bond girls in movie history, who suffers the most sexist scene in Bond history, but she is so pathetic, no one even cares. Nick Nack is only slightly better, played for nothing but laughs.

Bottom Line: A good film, but it is just a little bit too… Roger Moore.