Here’s a review of Moonraker (1979) by Anna of Film Grimoire.

Moonraker (1979, dir. Lewis Gilbert) is also known as “Bond in Space”, because it’s the film where the one and only James Bond – this time played by the very charming Roger Moore – actually makes it out to the vast expanse of space. But in the beginning, before the outer space shenanigans occur, Bond is assigned on a secret mission to respond to a critical incident where an MI6 space shuttle has been hijacked. It seems that a millionaire named Hugo Drax is involved, and Bond must investigate this suspicious individual to prevent further damage to the British Crown.

Some say that Roger Moore’s interpretation of James Bond is too silly or too much of a parody of himself, to which I disagree. Roger Moore’s Bond is certainly not the most serious of the bunch, but it’s his sneaky charm and boyish irreverence that make his Bond films a lot of fun. Moore’s performance is counterbalanced by a slightly weak Bond girl in the form of Holly Goodhead (Lois Chiles), and a cartoonish villain in Hugo Drax, played by Michael Lonsdale. One of the standout co-stars of the film is Richard Kiel, reprising his role as the classic henchman Jaws, whose scenes in this film humanise his destructive tendencies that are on display in this and in The Spy Who Loved Me (1977). 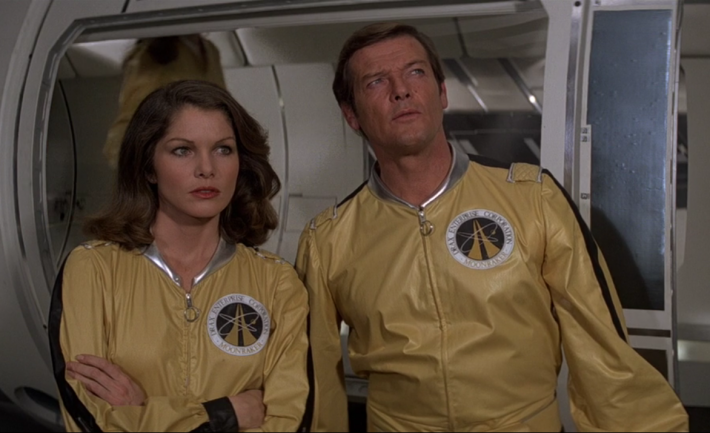 Some people also say that Moonraker is one of the worst Bond films of all time. To that, I also completely disagree (not to mention, some of the other films are much, much worse). Moonraker plays host to some of the weirdest and most random stuff of all of the Bond films, but it’s also home to some of the more iconic and suspenseful moments of the series. Whenever I talk about Moonraker I always talk about the double-taking pigeon in the scene where Bond jets across St Marks Square in Venice in a boat that can operate on land, which is the height of the film’s silliness. But some key moments such as the ultimate double entendre of “I think he’s attempting re-entry, sir”, the trope of the fight on the cable car, the pushing of a threat out of a space shuttle hatch door (referenced in the Austin Powers films), and the snooping and espionage to sort out exactly who Hugo Drax is and why he is a threat, all equally ensure that Moonraker is filled with lots of little moments that will thrill and excite most viewers.

If any criticism can be levelled at Moonraker, it’s that the film does have some strange lull points in the story where the viewer can get a bit sleepy. It’s quite a long film, and at times the story feels overstretched. Additionally, when the space action does start happening, it’s a bit Star Wars­-ish with lasers shooting everywhere to the point of being funny; especially given that Moonraker was essentially created to pander to that emerging sci-fi film market at the time. If you can’t handle cheesiness, this is not the Bond film for you. Even though there are some seriously sinister moments in this film, you know what kind of film you’re in for when the pre-title sequence includes footage of a villain falling through the sky only to be cushioned by a circus tent.

Maybe the fact that this is one of the more self-aware Bond films is why I really love it. This space drama is quite compelling, and when I look back on the film, there are a number of separate scenes that stand out and cause Moonraker to claim a coveted spot in my top 5 list of all the Bond films. Roger Moore is one of my favourite Bonds due to his humour and charm. Perhaps people who are fans of the Bonds played by Sean Connery or Timothy Dalton may not like this film as much due to its outlandish nature, but if you’re able to tolerate silliness, Moonraker really is all in good fun.