Once again, for today’s first review, here’s Luke of Oracle of Film‘s take on Moonraker (1979). 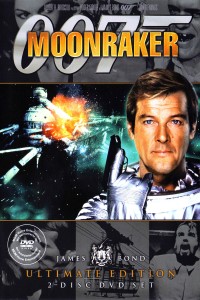 James Bond. You appear with the tedious inevitability of an unloved season.

Brief Synopsis: A space shuttle is stolen and MI6 fears it is being used as a weapon of mass destruction.

Moonraker is one of the worst Bond movies out there. The most obvious places to criticise this film is space. I have no problem with James Bond tackling space as a set-piece, because it is an obvious place to go. It is just handled all wrong. There is no excitement or tension, surrounding the arrival in space. The sound effects and slow motion is borderline silly. The entire sequence on the Moonraker space station is the worst few minutes Bond has endured. The other problem is Jaws. He is overdone here, Moonraker becoming a string of punch-ups between him and Bond. Some of them are inventive, but they never become anything too memorable, because they always end the same way – Jaws is defeated, pulls a comical face and somehow survives.

There are moments that lift it above the awful. The opening sequence is one of the best yet, no one quite sure how even James Bond is going to get out of that situation. Drax might be a dull villain, but one scene is horrifically good, when he sends a pack of dogs after a woman who betrayed him. Holly Goodhead is also a great Bond woman, echoing Anya’s resilience and resourcefulness, but Lois Chiles is a slightly better actress, meaning that she might just claim the position of the stronger character. Shame they are trapped in a bad movie.

Bottom Line: There’s no such thing as a truly awful Bond movie, but Moonraker comes very close to be the exception that proves the rule.