Once again for today’s first review, here’s Luke of Oracle of Film with his opinion of one of my favorite Bond movies, A View to A Kill (1985) 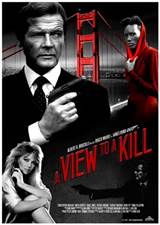 A VIEW TO A KILL

Brief Synopsis: Bond is sent to investigate Max Zorin who has created a microchip with alarming similarities to the British secret microchips.

My Take On It: A View To A Kill is a difficult Bond for me to review. It has always been one of my favourites, although I am painfully aware that this is mainly down to Christopher Walken, who delivers one of his greatest performances as Max Zorin, the villain of A View To A Kill. He Is magnificent, playing it with a fresh energy and expressing the clever blend of insanity and maliciousness of the character. However, when we put Walken to one side, there isn’t too much else to like about this movie.

The plot is very weak, something I find myself criticising a lot about the later Moores. The British start investigating, because someone has copied their microchip design. This design is for a microchip to help withstand a nuclear blast. The cynic in me feels a little sceptical that the British would send their best agent… no, assassin… to track down a company who wants to replicate a microchip to save Russia from a nuclear attack, rather than bad guys who want to build a weapon. However, when we get to the investigation, Zorin is so obviously evil, this intro plot device is brushed away promptly. The horse racing scandal is an odd way to start the story, offering a weak link to the actual plot, but admittedly this section is fun, watching Moore and Patrick Magnee (god damn John Steed!!!), investigate the stables. Weaker is the section afterwards, where Bond chases up leads. It is all over the place and goes from scene to scene, a little confused. Bond investigating City Hall is not fun and the KGB agent that Bond sleeps with in a Jacuzzi feels unnecessary. John Glen has no control over the story.

Yet I love this movie. It has just enough good things to recommend it. Yes, Roger Moore is too old for the role here and the Bond girl is especially bad, but the villains are tremendous. I have praised Walken, but Grace Jones is one of the most threatening baddies to crop up in a while, racking up an astonishingly devastating body count. The finale is also incredibly fun. Who needs a story when we get to this point of the Bond film? Walken wants to destroy Silicon Valley, Bond needs to stop him – no more exposition needed. The writers do what they best and have fun.

Bottom Line: A weak film, but the ending provides a good way for Moore to bow out of the franchise. Christopher Walken is incredible.