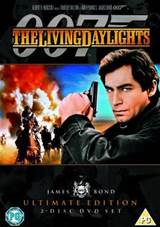 Here’s today’s first review of the the inaugural Timothy Dalton Bond film The Living Daylights (1987) reviewed by Luke of the Oracle of Film.

Please forgive the theatricals, it’s a hangover from my Oxford days.

My Take On It: Timothy Dalton is my favourite Bond. I think that he just suits the role so perfectly. He has that brooding intensity and subtle sophistication that makes Bond such an iconic character. He also is a much more romantic figure, making his love interests seem like stronger figures. Sure, in Living Daylights, the Bond girl isn’t too far away from every other simpering female in the franchise, but because the flirting is written much better, the romance feels more three-dimensional. It has been so long since we have seen anyone who isn’t Roger Moore take on a Bond movie, so it is refreshing to see James Bond, closer to the Ian Fleming vision.

Sadly, while Dalton is the best Bond, the Living Daylights is a little poor. If it wasn’t for the fact that it was Dalton’s first, I feel that this one would be just as forgettable as For Your Eyes Only. It suffers because the two villains just aren’t that good. They are bumbling criminals, bickering over their own plan, so everything that happens here, no matter how good the build-up (and don’t get me wrong, the Living Daylights does do a lot of its action well), doesn’t hit home, because there is a lack of threat. There is no way the bad guys are killing Bond, so why invest emotion? Of course, every Bond has this problem; it is just more obvious with the Living Daylights. But there are worthwhile scenes. Necros is a great henchman and the punch-up on the plane is the highlight of this movie. There is a neat twist with ‘who’ the bad guy is, even if it is revealed far too early.

Bottom Line: Dalton is superb, but it would have been nice to see him in a stronger story.