Here’s my closing review of Dalton’s final turn as Bond in Licence to Kill (1989).

Thanks to Luke, Zoe and Ruth for their reviews earlier today 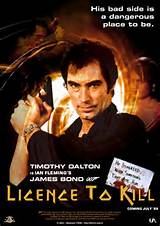 “Señor Bond, you got big cojones. You come here, to my place, without references, carrying a piece, throwing around a lot of money… but you should know something: nobody saw you come in, so nobody has to see you go out.” – Franz Sanchez

Brief Synopsis – Bond goes after a drug dealer who creates a personal vendetta after he attacks one of Bond’s best friends on his wedding day.

My Take on it – I remember when this movie came out in the summer of ’89 along with lots of other action packed summer movies.

Besides this Bond flick, we were treated to new installments in the Indiana Jones, Lethal Weapon and Ghostbusters series and the Tim Burton wonder Batman (1989)

I will always fondly remember that summer. 😉

Timothy Dalton’s return to the Bond role was another great outing for him and it truly is unfortunate that this was also his final one.

He was able to bring a more serious tone to the storyline and was able to overcome much of the campyness of the Connery and Moore eras.

Yes, this one is more violent and graphic than all of the previous installments, but that is acceptable when making a much more serious version of the man we know as Bond. (Daniel Craig has been able to bring those feelings back with his movies).

Follows the rest of the Bond formula to a T, so you won’t be disappointed.

Great title song by Gladys Knight and I even recall owning the soundtrack for this film because it was so good.

I’ve always thought that Carey Lowell (Mrs. Richard Gere) is very beautiful and she looks great in this movie as a Bond girl.

Bottom Line – Dalton once again proved that he was a very good Bond with his second outing. More serious and violent installment, but still gives us everything we expect from a Bond film and more. Great title song by Gladys Knight. Recommended!