For the final Brosnan Bond movie, here’s Luke of Oracle of Film with his view of it 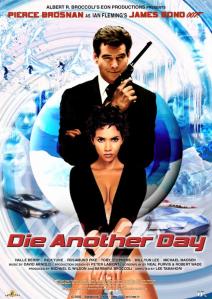 “I know all about you – sex for dinner, death for breakfast.”

Brief Synopsis: Captured for years by the Koreans, Bond is eventually released and sets out on a mission to find out who killed him.

My Take On It: Pierce Brosnan finally lost control of his run of three good movies with Die Another Day, which critics say to be ‘too far gone’. The technology borders upon Sci-Fi and the set-pieces are up there with Moonraker for ridiculous. All you need to do is list off the gadgets and it is seems more Bond parody than an actual Bond movie. An invisible car, a satellite that shoots lasers, the Goldfinger laser taken to extreme levels – there is quite a lot of nonsense littered throughout Die Another Day. It doesn’t help that Brosnan is ageing and that there is a lot of competition from other genres out there.

Truthfully… that’s all bulls***. Bond has always been about the future, especially Pierce Brosnan. Even in Dr. No, the technology used there, while ordinary for our day and age, was futuristic for the audience back then. Bond is meant to come against unstoppable odds and usually has to take on some extreme gadgets. However, I don’t think this takes away from the fun, but rather helps it excel. The car chase on the ice is the best Bond car sequence yet. The over-the-top fun screams fun. This is the Bond we have always had, I just think that the easy things to complain about the franchise are just much more prominent here. I will agree that Die Another Die isn’t as strong a Bond as we have had before, but when it comes to a solid action with 007, you could do a lot worse than Die Another Day.

Bottom Line: Madonna aside, Die Another Day is a strong entry. Silly, yes, and the melodrama does get in the way, but I would hardly call it a bad movie. Quite the opposite, as it happens.