Here, once again are my final thoughts on the daily Bond movie. Today’s was Quantum of Solace (2008)

Huge thanks to Luke, Ryan, Troy and Kieron for their reviews earlier today! 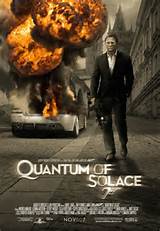 “The first thing you should know about us is… we have people everywhere. ” – Mr. White

Brief Synopsis – Minutes after the ending of the previous movie, Bond continues his quest to find out what organization is behind the events that brought him and Vesper to their previous ordeals.

My Take on it – The best way to watch this movie is immediately after watching Casino Royale (2006).  They are the only 2 Bond films (so far) that can be directly connected by their storylines.

This movie literally picks up just minutes after the events of the previous movie, making it essentially feel like one longer Bond adventure.

This time around, I actually watched them one after the other so as soon as the credits rolled on CR, I popped this one in and felt like I was just continuing the same movie.

The first half hour or so works so well together with CR and the way it was made; the adrenaline was pumping the whole time and we get to see Bond do some spectacular action shots.

Unfortunately, the momentum then starts to dis down and eventually, we are treated to something one would expect from any of the previous 20 “official” Bond flicks, proving once again that eventhough they were able to successfully break the mold for 1 and a quarter movies, but couldn’t sustain it for much longer than that.

I think had they continued with this storyline for another movie it would have elevated the “sagging” bits here, but alas they chose to go a new way with the next film.

At least they had the ability to give us so many throwbacks from the previous Bond movies to entertain anyone who is familiar with the series including a Bond girl with a very “tasty” Bondesque name; Strawberry Fields.

Bottom Line – Starts off great, but slows down too much about quarter way through bringing the sophomore Craig outing to just a typical Bond adventure instead of continuing the momentum from Casino Royale (2006). Recommended!