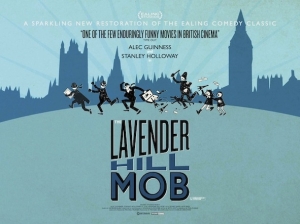 “I was a potential millionaire, yet I had to be satisfied with eight pounds, fifteen shillings, less deductions. ” – Henry Holland

Brief Synopsis – Two neighbors plan a perfect heist and realize that you can never anticipate everything that can happen even when you plan it all so meticulously.

My Take on it – When I saw that there was a heist movie starring Alec Guinness and Stanley Holloway, I was sold right away.

This isn’t quite a straightforward thriller because it’s also at the same time a social parody.

The premise is indeed a heist, but there are numerous humorous scenes along the way that are solely funny because of the absurd realism of them.

A prime example is the port scene where the characters need to go thru customs in order to catch a ship to England. I was laughing so hard because even 63 years later, I dont think that scenario has changed much.

Unfortunately, a lot of the other slapstick scenes just aren’t as funny nowadays as they probably were back then.

The heist itself and its planning are actually just minor bits of the story which make that aspect of the plot completely average.

Genre Grandeur Worthy? – Nope. Has some great scenes but overall it just doesn’t do it despite having two great lead actors.