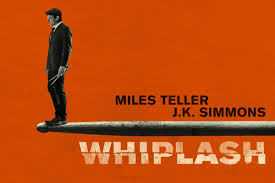 “There are no two words in the English language more harmful than good job. ” – Terence Fletcher

Brief Synopsis – A music student in a prestigious New York Arts academy withstands the constant abuse by one of his teachers in order to become the best drummer that he can be.

My Take on it – I have heard rave reviews for months on the performance of JK Simmons in this movie and he still remains the frontrunner for the best supporting actor Oscar this year.

I have always been a fan of Simmons’ supporting performances whether it be as Chief Pope in the TV show the Closer or as J. Jonah Jameson in the Spiderman movies, he has always had a dominating presence on screen.

His performance here blows all of his previous performances out of the water. (And that’s an understatement)

His presence onscreen is so riveting and on spot that I’m not sure there are many actors who could have given us as great a performance as he did in this role.

Equally amazing in this movie is Miles Teller as the young aspiring musician. He also gives us an inspirational performance as a young man willing to do just about everything he can in order to achieve greatness.

We learn so much about both of these characters by their actions and reactions throughout this film.

The plot itself is a relatively simple one that has been seen in some form or another numerous times, but these two actors propel the story to places rarely seen onscreen.

This movie is like a deadly car crash that eventhough we see disturbing images, we want to keep watching. I’m not saying whether that’s a good or bad thing, but it is what it is.

I watched this two days ago and my impressions of it keeps getting better the more I think about it.

Bottom Line – Excellent performances by Simmons and Teller make this movie such a disturbing pleasure to watch. Perfect example of a movie with a simple plot that is launched into the stratosphere by outstanding lead characters and the actors who portray them. Highly recommended!