For this month’s first review for Genre Grandeur – British Thrillers, here’s a review from James of Back to the Viewer of his favorite British Thriller – Layer Cake (2004)

Next month’s Genre, chosen by Justine of Justine’s movie blog is Coming of Age movies. To participate, send me your review to coe@movierob.net by 22nd Feb.  Thanks to Justine for a great choice.

Let’s see what James thought of this movie… 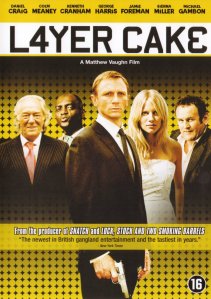 When it comes to British Thrillers my thoughts immediately turn to Layer Cake and for good reason. But first a brief look at some of Layer Cake‘s forefathers, the films that paved the way for the success of the modern day gangster crime thriller. Get Carter (1971), magnificently British with an archetypal Michael Caine performance stands out for its realistically gritty portrayal of 1970s British gangsterism.

British audiences are attracted to the brashness of gangsterism, of jobs gone wrong, of bandying shotgun roamers. Michael Caine’s performance in Get Carter illuminates a gritty exostential North East England and plays out like an American crime fiction novel, even alluding to Raymond Chandler’s ‘Farewell My Lovely’ in the title sequence. Where Get Carter and Layer Cake are similar lies in their ability to capitalise on their respective present cultures. Set and filmed in 1970s Newcastle Get Carter profits from its eye opening will to present an individualised sense of morality as Caine roams the land, shotgun in hand, in search of justice within a system that he belongs to, was born into and exploits shamelessly. Layer Cake brings us into the 21st Century and yet not much has changed. London, 2004, much like Newcastle, 1971, houses corruption, profiteers, clueless ‘entrepreneurs’ looking for a step up to the big time, and most importantly a poor sap caught in the middle of it all. “Welcome to the layer cake.”

The public desire for a new British gangster film couldn’t have been greater by 2004. Get Carter laid the foundations for a no-nonsense on-screen British gangster. But since the days of Lock, Stock, and Two Smoking Barrels (featuring Vinnie Jones as Guy Ritchie’s very own Get Carter-esk loose cannon) and Snatch. the public was lacking a crime thriller that packed the same punch as Brad Pitt’s Mickey O’Neil.

Sure, the appeal of British gangsterism to a British audience is genuine but it isn’t just the idea of a gangster that fuels the public intrigue. Guy Ritchie set the bar high with Lock, Stock and arguably raised it higher with Snatch. but while both of these are heavily British they lack the ‘thriller’ element. Utilising comical irony, big characters and unlikely relationships Ritchie stacks the plot in favour of comical criminality. Where Layer Cake differs is in its depiction of a very real capitalist view of business acquisition, even the drug business that Daniel Craig quite rightly points out, what with advances in drug laws, won’t be around forever.

Jonathan Glazer whacked the heat up with his Spanish set Sexy Beast (2000) and on some levels Layer Cake can be likened with Ray Winstones desire to retire, and stay retired. But Sexy Beast‘s intrusive home invasion withdraws into a claustrophobic battle of psychological wit. Layer Cake gives a more informative, broader image of 21st century crime pulling elements from Ritchie and Glazer to form a well rounded British Thriller that carries its own weight and packs a stylishly auteuric punch.

Daniel Craig’s performance at the centre of this intricate British crime thriller undisputedly earned him his double-0 status for Martin Campbell’s revamped Bond in Casino Royale (2006) and for good reason. Matthew Vaughn ensures this British picture sticks to its roots and with a supporting cast featuring the likes of Michael Gambon, Dexter Fletcher and the stunning Sienna Miller there are plenty of reasons to get excited about Layer Cake‘s rewatchability.

The intricacy of Layer Cake‘s plot succeeds because it doesn’t leave the viewer confused, more intrigued as to how the players will come together and engage. The plot is never handed to us on a plate like a Victoria Sandwich at a stately afternoon tea, nor is it obscure, leading us to presume certain fragilities in the script or direction. Instead Matthew Vaughn opts for mystery, a need to know basis. At one point Gene, played by Colm Meaney, says “I should’ve told you this earlier.” Much like Daniel Craig, the nameless protagonist ‘XXXX’, we are often left in the dark about certain pieces of information. On more than one occasion do we find ourselves searching for the missing piece of the puzzle. Until wham! We’re carted off to a smug looking Michael Gambon brandishing the shiny puzzle piece freshly plucked from a members club bar stool.

As the audience we are cleverly attached to Daniel Craig’s relative ignorance which further magnetises his character’s alluring unpredictability, effectively drawing the audience in and winning them over. However, don’t be fooled, there are no heroes, no good guys fighting the good fight. We’re commonly reminded that the layer cake is business, you do what you have to do to survive, “until one day, you’re up in the rarefied atmosphere and you’ve forgotten what shit even looks like.”

For whatever issues people are inclined to bandy about concerning Layer Cake, my personal favourite being, in reference to Daniel Craig’s “icy” performance, “DC is not at all the guy for movies like this. I’d rather someone like Orlando Bloom. (who definitely doesnt look like a trained hitman)” These sort of arguments make me a little mad at the ever invasive Hollywood culture that poisons the minds of viewers who have the obtuseness to request Orlando Bloom over Daniel Craig in an independent British crime thriller.

Severely underrated Layer Cake is a Must-see by any standard but as far as British Thrillers go I can’t recommend this film enough. Packed to the brim with Britishness, from language to mannerisms Matthew Vaughn’s layered character driven thriller deservedly competes with Guy Ritchie’s more recognisable  Lock, Stock, and Two Smoking Barrels and Snatch. and refines the unfiltered brashness and brings the British gangster film into the 21st century in style.

Huge thank you to MovieRob for reaching out to me for this month’s Genre Grandeur and reviving ‘Back to the Viewer’ from the shadowy blogging abyss. emmakwall also deserves a mention for her excellent Genre Grandeur choice. I hope you enjoyed the post and I look forward to my blogging resurgence.

You can find movierob at: https://movierob.wordpress.com/
Likewise emmakwall at: http://emmakwall.com/

Thanks again to James for this review!