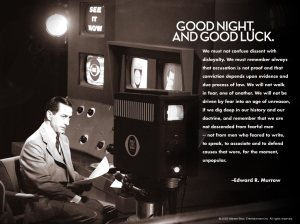 “There’s no news, boys, so go out there and make some news. Rob a bank, mug an old lady, whatever – just do something.” – Fred Friendly

Brief Synopsis – Chronicles the media war between Joseph McCarthy and Edward R. Murrow during the height of the Senate hearings on communist infiltrators in the arts during the 1950’s

My Take on it – This is a movie not many people have had a chance to see despite it getting multiple Oscar nominations including one for Best Picture.

David Straitharn is great in the title role and plays the role so low key that it gives even more power to his performance.

This movie is entirely in black and white and I think that it was the right decision because it gives us a more nostalgic feel. They were also able to seamlessly integrate real footage of McCarthy this way.

The way that Director George Clooney shot the film in a very subtle way gives it such a powerful feel because it shows how the fledgling tv news media of the 1950’s was able to influence world events.

Bottom Line – Straitharn is great here as Murrow. Nice choice to do it all in black and white and incorporate real footage of McCarthy. Subtle but powerful film about the media influence on the world even back in the 50’s. Highly recommended!