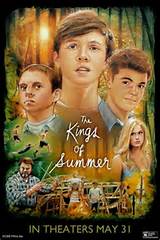 For this month’s first entry for Genre Grandeur February – Coming of Age movie’s, here’s a review of The Kings of Summer (2013) by Tom of Digital Shortbread.

Let’s see what Tom thought of this movie:

Brief Synopsis: Three teenage friends, in the ultimate act of independence, decide to spend their summer building a house in the woods and living off the land.

My take on it: Three boys spend their summer bushwhacking into some woods to build their own summerhouse made from scraps and 2X4’s. They also learn to hunt, explore new places, and befriend some of the weirdest people you may ever encounter. One of them gets bitten by a venomous snake and starts to foam at the mouth within minutes. In short, this was a movie that left me seriously envious of other people’s summer plans. . .

This is director Jordan Vogt-Roberts’ first film, and while The Kings of Summer is not likely to be on the forefront of anyone’s mind come the end of the summer, he’s started off on the right foot. This is quite an enjoyable picture replete with interesting characters, some good laughs and gorgeous scenery. It’s also not every day you come across a couple of kids — I believe they were freshmen in high school — who are so determined to  escape their ‘normal’ family life that they are willing to give up modern conveniences and comforts just to make a statement: that they are indeed capable of growing up on their own terms. Watching the events unfold in this film is a little like watching a less-threatening episode of Survivorman, where Bear Grylls needs to learn how to avoid the temptations of stealing food from a Boston Market that sits mere yards away from his woodland shelter.

Joe (Nick Robinson) and Patrick (Gabriel Basso) simply can’t tolerate life under their parents’ roofs any longer. For Joe, life after the passing of his mother has become increasingly burdened by his father (Parks & Rec‘s Nick Offerman) and his unwillingness to really try to bond with his son in any normal sense of the word. He is an authoritarian and has to have things his way. Patrick’s situation is certainly not any more desirable; in fact, I pitied him more. His parents, played by Marc Evan Jackson and Megan Mullally, are written purely as caricatures of your worst-case scenario of the over-protective variety. He can’t stand how his mother makes quips about every little facet of Patrick’s personal life, and quite frankly, neither could I. They are not exactly realistic portrayals of parenthood — then again, such exaggeration is meant to enhance the experience of freedom these boys find in the woods. The parents in this film evoked the farcical incompetence of every adult pictured in Wes Anderson’s Moonrise Kingdom last year; who else better to trust than in yourselves when the rest of the world just seems so. . . . out of whack?

Perhaps nothing seems more out of whack than the third member of this memorable little trio of kids roughing it out in the woods. Joe — the first to discover a random open spot in the woods and being the one to convince everyone else to flee their families — and Patrick serve as the only logical relationship in this film. At a big keg party one night, they come across a scrawny little kid by the name of Biaggio (Moises Arias). If Joe and Patrick are the surprisingly normal, self-assured products of their bizarre upbringings, god-only-knows where this guy is coming from. While I’d agree he seems a little tacked on to the story here, he serves as a wonderful little running commentary on what it’s like to become a part of something; the satisfaction each of us need to find our own place in a group — no matter how large or how small. As strange as Biaggio is (and boy, is he strange), it’s really heartwarming to see him come into his own. Arias may single-handedly have won me over in this film.

Perhaps I just identify more with the weird. . . who knows.

Regardless, this film relies not only on solid acting, but the cinematography has an equally important role in telling the story. Everything from grand, sweeping shots of undeveloped forest to gorgeous lens flares in fields of rich yellow hues, to the visual irony of seeing the boys pop out of the thicket and right back into civilized society, adjacent a restaurant where they’d be foraging for roasted chicken.

Even if the central plot is as primitive as their newly adopted lives, The Kings of Summer is a subtle, if not poignant exploration of what causes some people to want to mature and grow up faster than others. Becoming a responsible adult takes on a whole new meaning in this film, even if at times the message is a little contrived (e.g. the parental units are simply too ridiculous to really take seriously). As well, the film’s succinctness and  lack of any real discernible drama might not be enough to sell a few folks on this summer fling. I suppose there is a little drama added into the mix, but it’s nothing we haven’t seen before and is certainly predictable, even despite the timing of it.

Bottom Line: I thought the film to possess a rare level of nostalgia that a lot of indies seem to yearn for but never quite achieve. Plus, it boasts one of the coolest set pieces I’ve seen in a film in awhile.